Vinnie Jones paid a visit to ICE yesterday ahead of the release of his new game The Crown on April 27. 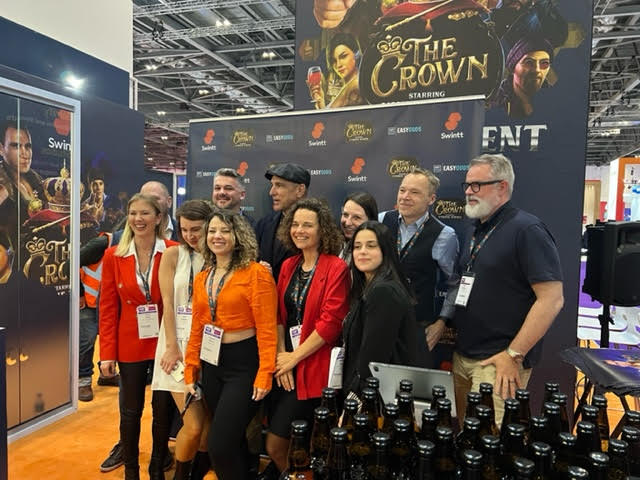 Vinnie Jones paid a visit to ICE yesterday ahead of the release of his new game The Crown on April 27.

The ex-footballer turned actor, whose films have included Snatch and Lock, Stock and Two Smoking Barrels, explained the narrative behind the new release by game provider Swintt:

“The game is basically me getting a crew of lads and we’re gonna go and rob the crown jewels… and anything else in our way at the time.”

While the game is all about the thrill of the heist, a portion of the proceeds will go to charitable causes. Vinnie lost his wife of 27 years, Tanya, in 2019. Tanya had undergone a heart transplant at Harefield Hospital aged just 21.

“We have done a deal where Swintt will give a portion of the money that they received to Harefield hospital, that’s where my Tanya had a heart transplant back in 87. It’s very important for us to do that. So, not only will it give the lads out there or women a lot of joy. It will also go to a really good cause.”

Jones was approached for the game through his partnership with betting tips platform easyodds.com.

“So it came through that it’s been great, the graphics have been fantastic. And then you go into the recording studio and smash it out and for every scenario together, and they do that with the graphics and away we go.”

He added that the charitable angle was now an important part of his projects, from men’s mental health to helping Harefield hospital:

“I just found that there are problems to deal with grief, the anger, it’s all there. And that kind of comes under the mental health umbrella… I want to help people that have got these diverse devastations in their lives to try and stay on the straight and narrow.”

Vinnie Jones was taking photos at the Swintt booth, situated at N5-315 at ICE London. Printed versions are available at the booth today and tomorrow.