Resorts World Las Vegas was the Strip’s first major property to open in more than a decade, though it did so under difficult circumstances. President Scott Sibella talks to Robin Harrison about the first few months of activity, how the lingering effects of Covid-19 are being mitigated, and how the property is preparing for an influx of international visitors. 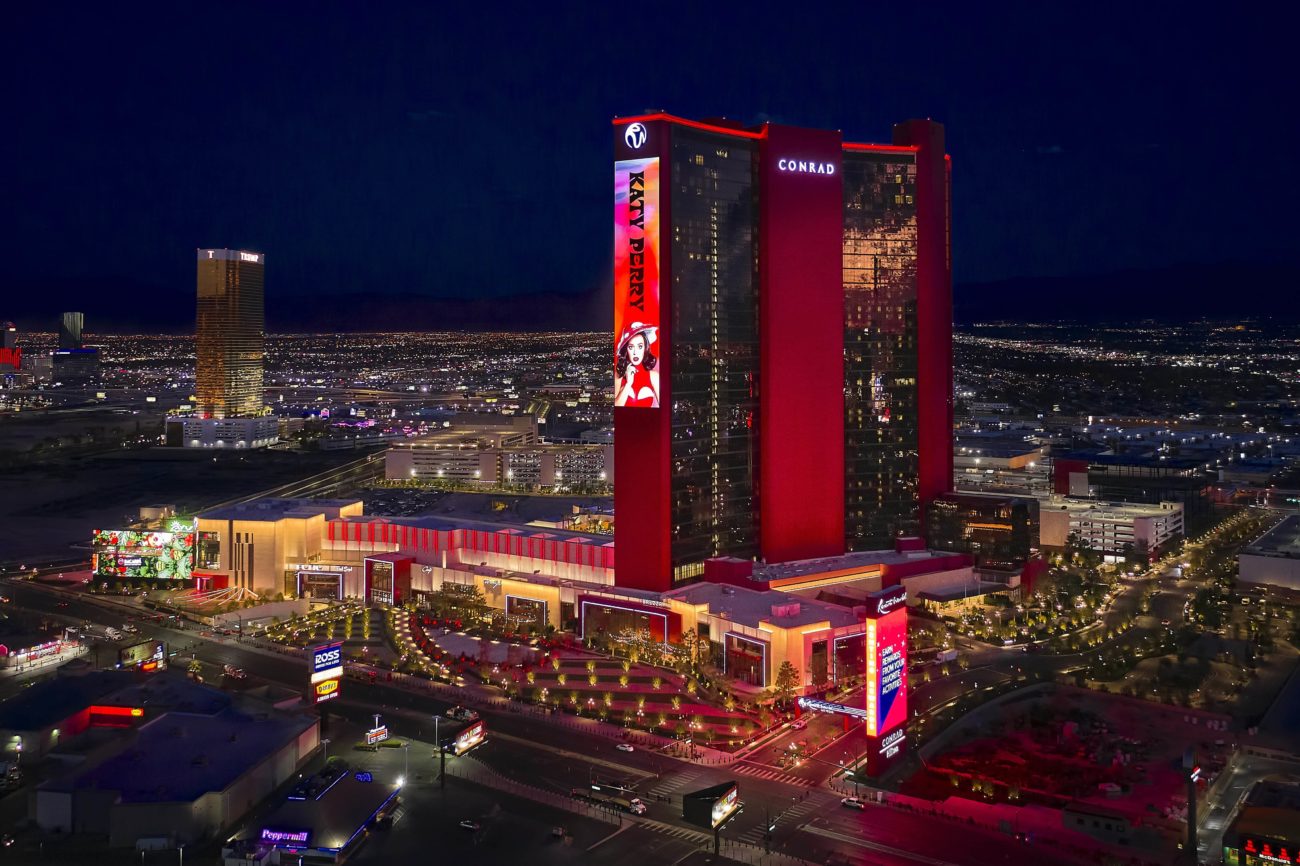 The development of Resorts World Las Vegas stretches back to 2013, when Genting Group acquired the site that previously housed the Stardust Casino from Boyd Gaming in a $350m deal.

As the first new resort to open on the Las Vegas Strip since the Cosmopolitan in 2010, the $4.3bn property was highly anticipated, and it opened with a bang. “The turnout for opening night was truly incredible as we welcomed over 20,000 visitors to the property throughout the evening,” says president Scott Sibella, the industry veteran who has overseen its development since 2019.

“We continue to progress, and as a property that’s a little over four months old, we feel very good about how everything is going,” he says.

Considering that the year leading up to the grand opening on 24 June saw Las Vegas’ casinos closed for the first time since the Kennedy assassination as a result of novel coronavirus (Covid-19), its timing was particularly advantageous. Weeks before, on 1 June, properties were allowed to return to full capacity with no mask mandates.

“We had so much momentum when we opened – I wish we could say we planned it that way – but when we opened at the end of June they had relaxed restrictions, so there was no masks, no distancing and people just wanted to come out, celebrate and have fun,” Sibella says. “And it was like that non-stop for the first ten days.

“We were overwhelmed, which was a good thing, because everyone wanted to see the new property.”

Key to its appeal, as Sibella outlined upon opening, was the ability to offer attractions that appeal to all levels of customers. He feels Resorts World Las Vegas has “absolutely” delivered on that promise.

“That was important to us. We wanted to build a truly integrated property where we could have all types of customers,” he explains. “[That’s] why we partnered [with] Hilton because of the various brands they had. It’s been working nicely.”

He adds that approach goes beyond different tiers of accommodation and into the restaurants and attractions. That informed how the property was programmed and laid out, to offer as much to the high-end luxury customer as it does to the masses.

And at a time when Covid concerns are still prevalent, being able to offer “the best of the best” is designed to enhance the customer experience using the latest technology. In the decade since the Strip’s last property opening, technology has evolved rapidly.

This means everything from Resorts World Las Vegas’ air filtration system to how the property is cleaned, from the mobile check-in to a first-of-its-kind food ordering system (guests place orders via the Grubhub app) is designed to be as seamless as possible.

“It’s not that we’re any smarter, it’s just really difficult when you have an existing property to change your infrastructure,” Sibella adds. “We were able to start that way, so it’s easy to just plug in new technology when things change, and that’s what have we designed here.”

“Technology does change rapidly and it will be much easier for us to follow trends when the new technology comes out, which gives us a big advantage.”

In Sibella’s view, gaming has not been hit by new technology as fast as others, and that change can’t happen overnight. “Our goal and focus now is educating the guests because it’s new.”

“Las Vegas is not very hi-tech when it comes to gaming, but we’re going in that direction, and again, Resorts World Las Vegas is set up for that,” he says. “There’s a lot of changing infrastructure, we’re already set up for that.”

The biggest changes may be those to come on the gaming floor. Resorts World Las Vegas aims to make the casino cashless, an evolution he compares to the process of phasing out coin-operated slots. “A lot of people didn’t understand it and were wondering what the [ticket-in, ticket out machines] were, but it finally worked and now you don’t find any coin machines on the casino floor,” he points out.

“We’re doing the same with table games. All of our chips are RFID chips, so we can track them. We know if the game is balanced. We know if the cage is balanced, because as soon as they are placed on the counter, we know exactly how much they total,” he explains. “There’s less moving money around, which allows us to be more efficient, effective for the employees and helps avoid mistakes.”

And the adoption rate for cashless is improving week-by-week, Sibella continues. People are even leaving games without taking their chips, either porting their winnings to their account on their mobile devices, or taking a TITO slip, something he sees as a key differentiator.

“That’s something you just can’t do at other properties because of the existing infrastructure,” he says. “Every game has to be wired differently, there’s a lot work to do on the floor, and you have to buy the right table games. We took advantage of being the first opening in over a decade. It’s little things like that which make the technology completely different.

“I recently went to [a Las Vegas] Raiders game, and the entire stadium was cashless. That’s where this business is heading. We love that we’re the innovator leading the way here in Las Vegas, and the country really, when it comes to how sophisticated our casino floor is.”

In his eyes, it’s similar to the airline industry. Sibella says the first time he used mobile ticketing on Southwest Airlines, he couldn’t understand why he didn’t have a boarding pass in his hand. Now he doesn’t even consider having it in any other format.

Upon reopening, there was no mask mandate, no social distancing, and clear evidence that people were flocking back to Las Vegas. June marked the fourth month in which the Nevada Gaming Control Board reported statewide revenue in excess of $1bn, but as Covid-19 cases started to creep up, mask mandates returned, first for staff, then from 30 July, for casino patrons.

Sibella admits that when the mask mandate was reimposed, Resorts World Las Vegas did see business slow down, but adds that it allowed the property to fine-tune the guest service, open additional amenities and enhance its safety processes. This, he argues, will be a competitive advantage going forward.

“I think people will continue to look for a safer guest experience after the pandemic, and we’re really good at it now,” he says. “We continue to follow all the guidelines and look forward to the masks going away some day, and the convention business returning.

“We know it will and we are in the perfect location across from the Las Vegas Convention Center – we’re a convention property – and we’re going to do what we have to do until it gets better.”

In spite of the Covid controls, gaming revenue continues to perform strongly. Revenue has continued to top $1bn each month since July, and Sibella is very optimistic about its future.

“This town is resilient,” he says. “The city is doing much better than others, and it’ll be great for the city and Resorts World when that day comes.”

When that day comes, the property that opened in June will have yet more features and entertainment options. The focus for the grand opening was to have all 3,600 rooms available, even if that meant some of Resorts World Las Vegas’ restaurants and nightlife options would come at a later date.

Zouk Nightclub has since opened – “People love it,” Sibella notes – as has its spa. Bar Zazu, the Caviar Bar and Carversteak are all to follow, alongside the Eight Cigar Lounge.

“Then the last piece of the puzzle is the theatre, which will open on 1 December with Carrie Underwood,” he says. “We’re really excited that everything is complete. Usually you don’t see that as it takes place over multiple phases.”

For Vegas, he continues, these attractions are particularly important. While he still sees Resorts World Las Vegas as a gaming property (“that’s what this city is all about”) much of the development has been focused on the non-gaming elements.

“Now did we spend as much time on programming and developing this property when it came to gaming? Probably not, because we’re already very good at that. We know how to run a casino and we think we have a very sophisticated casino that uses technology in a very innovative way.”

This, Sibella explains, reflects the ongoing paradigm shift in Las Vegas. He estimates that about 65% of revenue in the city comes from non-gaming, compared to 35% from gaming. It will continue to shift in favour of non-gaming.

“At the end of the day Las Vegas is known for the best food and beverage, the best retail, the best entertainment, the best attractions, the best accommodations, the best nightlife, so all that was important to us in lieu of making sure we had a very sophisticated casino.”

“The casino is very important,” he adds, however. “We designed it to attract the high-end customers, the international customers that we know will be coming back and who we’re really counting on, and what we’re competing with Las Vegas’s other high-end properties for.”

And now, with restrictions on inbound travel to the US lifted as of 8 November, that international audience can finally see what Resorts World Las Vegas has to offer.

“We’re so excited about that announcement,” Sibella says. “We’ve already seen people making reservations; we built this property for all guests, including international travellers and high-end casino customers.

“Resorts World has a great presence all over Asia, where everybody knows Genting Group, which is something we’re still developing in the US and educating people about the company and who we are, but we’re a big international hospitality company – we have a big following.

“We’re really excited to welcome the international customers from Asia, South America, Mexico, and we’re seeing reservations booked for November. It’ll play a big part in our success and we’re excited that it’s finally coming back.”

He points out that with an 88-acre site, the property was “built for masses of people”. Therefore he’s confident that it can handle the international audience.

“We’ve got enough restaurants, we can handle the volume, it’s easy to get in and out of the property, how you get to your room, the journey through the property – it was great to see it tested. But we haven’t seen that for the last couple of months, so we are excited to see that and look forward to showcasing what this property can do.”

And there’s significant scope for further development. Resorts World Las Vegas may sit on an 88-acre site, but only half of that has been developed. At the grand opening on 24 June, it was already talking about what’s next.

“[We] now have our integrated property and attention turns to phase two,” Sibella says. “More convention space, more rooms, more attractions and that’s all in motion.”