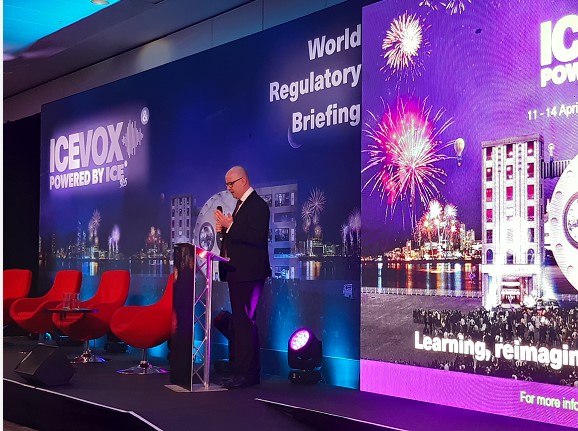 Opening the WRB sessions at ICE London 2022, Rhodes said the UK gambling industry had to be “realistic about those truths in the current climate.”

These universal truths, he said, included the continuing growth of the online sector.

“Covid has undoubtedly and unavoidably accelerated that pattern,” he said. “So when we talk about universal truths, what we’ve seen in the last few years is an enormous shift from what we call land-based gambling into online for the pandemic that has accelerated dramatically, but gambling is in reality a rental company that is based around taking money in exchange for experience.”

A view to safer gambling

Rhodes added that the Gambling Commission was now having to bring in new interventions to keep up with the massive shift towards online gaming including a ban on using consumer credit cards for gambling, strengthening protections of value customers or VIPs, making online games safer by design and improving the use of ad tech to protect children, young and vulnerable people.

He added that age and identity verification had also been strengthened and the Commission had made the adoption of the online exclusion to online gambling self-exclusion platform Gamstop mandatory as part of licensing conditions, enabling those who cannot cope with their level of gambling to safely exclude themselves.

Perhaps the largest opportunity when it comes to reducing harm, Rhodes said, was the single customer view, which would allow operators to see a player’s spend with all gambling brands rather than just their own.

Rhodes said the single customer view would help operators intervene at a much earlier stage.

He added that the commission would continue to work with the industry to create safer gambling in across the UK with a national strategy aimed at reduce gambling harms designed and delivered through industry collaboration which could encompass improvements in game design and treatment of high value customers. Collaboration amongst other regulators across the globe would be another “essential step,” alongside improved methodology for measuring gambling prevalence.

Rhodes said that, while gambling was traditionally seen as part of the leisure sector, it is in many ways also a technology industry.

He explained: “It’s also increasingly true, has been for some time, that the gambling industry is in fact a global tech industry… many operators describe themselves as tech platforms. And tackling crime and fairness in a global tech industry requires a different response from regulators than maybe we’ve seen before.”

He added that the industry’s gross gaming yield was £14 billion – the same size as the UK agriculture sector.

“When we talk about what that means in terms of consumer interaction in Great Britain, that’s £450 per second.”

At the same time, though, Rhodes noted that a number of other new products such as non-fungible tokens (NFTs) had gained prominence during the pandemic. These products, he said, posed a challenge to the regulator due to their status on the fringes of gambling.

“We’ve long talked about the gamification of entertainment, and the way that gambling and experiences have started to emerge more and more and looked less like typical gambling. But the products I’m talking about here have many of the hallmarks of gambling but are not licensed as such. So we have things like non fungible tokens, NFTs, synthetic shares, cryptocurrencies are increasingly becoming widespread.”

“Many of these products also market themselves deliberately as not being gambling or not regulated as gambling, but many of them occupy similar space, some of them cross over into that space and that is a huge challenge for us[…] We’re talking about investment and trading, but none of the safeguards that come with those words, but that is definitely changing the landscape of gambling as we see it as a regulator.”

He added the new technologies also have pattern of harms which could potentially cause financial distress in the worst cases.

“What we see in these cases is different. We see a long term pattern of money being deposited with theoretical improvements, yet none of the financial safeguards around them. When harm comes, it’s often instantaneous and significant, and there is very little or no recourse. We are likely to see more and more of these products emerging and more and more integrating alongside traditional government industry and maybe within it as well.”

At the same time, he noted, unregulated gambling also remained a threat to consumer protection. However, he added that fears around the black market must not be seen as an excuse not to drive up standards within the regulated market which has safeguards, standards and consequences for licensed operators.

“Arguing that we shouldn’t deal with some of the worst things that we see in the regulated industry, because of the risk of the black market, is to offer excuses that we should not be offering. There is a way to deliver the safeguards and standards in a safe way.”

As the UK government prepares to publish its white paper on gambling reform, Rhodes said the Commission was not looking just for legislative change or government review to make progress and would “raise standards with or without the white paper.”

He said the regulator would do this using data and by continuing to work with the industry and the Information Commissioner’s Office to develop a single customer view. He explained: “The goal of this is to make operator data better and be better used to protect consumers. The principles around this is very simple, but often misrepresented. Today it is possible for someone who is experiencing gambling harm online, and they’re gambling media control with one operator suddenly move on to another operator as soon as those interventions stop. This can continue an almost infinite number of times despite every single operator potentially doing the right thing.”

Another trend within the UK was the increasing number of mergers and acquisitions and complex ownership structures. He explained: “We’re not only regulating global tech companies, but we’re regulating multinationals. Let’s do more to share best practice, but also, let’s find ways to act together to share intelligence and to work together.”