In this exclusive extract from the ICE365 report, Building an omni-channel future for European casinos, former ECA chair Ron Goudsmit discusses the state of play for the industry today. 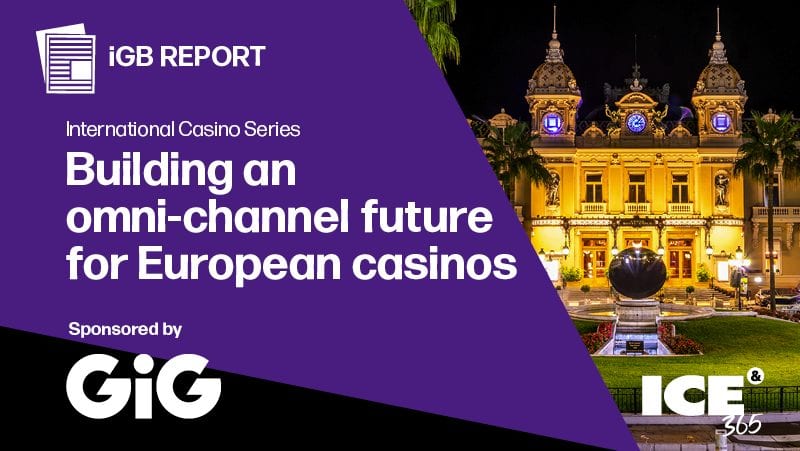 This is an extract of the ICE365 report, Building an omni-channel future for European casinos, sponsored by Gaming Innovation Group (GiG). Scroll down to download the full document, free of charge.

The devastation wrought on brick-and-mortar gaming has significantly shaped the sector. Ron Goudsmit, one of the ‘founding fathers’ of the European Casino Association, believes a more expansive industry may emerge.

“This is the deepest trough the European land-based casino industry has ever experienced,” European Casino Association (ECA) chair Per Jaldung said of 2020.

It’s hard to disagree, after novel coronavirus (Covid-19) forced operations to grind to a halt in 2020. Over the year, 37% of operating days were lost as a result of closures, and by April 2021, 70% of properties were still shuttered.

The average revenue decline among ECA members was 50%. The industry’s pre-pandemic headcount numbered more than 70,000; post-pandemic, that has fallen to 50,000. However, as vaccination programmes across the continent ramp up, and economies reopen, the challenge is now all about attracting customers back.

Ron Goudsmit, who chaired the ECA between 2006 and 2015, after helping establish the body in 2005, believes that vaccinations are a start, if not a panacea.

“Casinos have been closed most of the year, and vaccinations are one factor that will help bring up the guest numbers,” he says. “But then there are still various restrictions on capacity and limits on opening hours in a lot of places.

“The fact they are reopening is great news, even if they have to take special measures, so this all helps. But we’re not there yet. If you look across the board, vaccinations are increasing, people are allowed to travel, so we’re on a good track.”

This means the short-term focus will be on preparing for reopening, to ensure all the rules, regulations and restrictions are properly implemented. Key to his, he says, will be to make sure that staff are prepared and motivated.

“They’ve got to get back into their routine and [the operator has to] make sure they’re ready to receive the guests again,” he says. Unlike in the US, government support across Europe provided European staff with wages throughout the pandemic, and while jobs have been lost, employees have broadly been retained where possible.

This has seen the majority working reduced hours, reflecting the restrictions on the property.

That doesn’t mean there won’t be some shift, especially after employees found themselves not having to work night shifts or weekends. According to Goudsmit, people may even see the pandemic as the kick they need to pursue other things.

“But I think that in general most people are eager to go back to work and in Europe it’s not a problem in getting them to do so,” he says.

Undoubtedly, the look and feel of the casino floor will be different for returning employees and guests. Table games, for example, are not particularly conducive to social distancing, meaning greater emphasis will be put on slots. In the early stages, Goudsmit sees machines as being the revenue drivers.

“Slots are the easiest to play while distanced,” he says. “People who like to play table games will only return step by step, as restrictions slowly disappear. Once that is the case, and people are allowed to be closer together, then you’ll see the table games coming back.”

Whether this leads to more innovation around products, he’s not sure. There may be a degree of experimentation among players, trying the physical versions of games they played online, and sports betting could gain a bigger presence at a time when the US market is booming.

“Whether the actual product is drastically going to change, it’s hard to tell,” he adds. “People are looking at new games all the time, and with slots, you get some great new titles. With table games, you don’t see that much in the way of new products.”

It’s in ancillary services that Goudsmit sees the biggest scope for change, namely through cashless technology, something he says “was coming anyway”.

“Having gone through the Covid experience people don’t want to touch things, so that accelerated it. You’ll see that more and more in casinos but also elsewhere.” It’s for this reason that Goudsmit is watching Resorts World Vegas, the property that opened on the Strip on 24 June, with interest. It’s announced that it will go entirely cashless.

Though it may prove a pioneer with a cashless casino experience, it appears that Resorts World Vegas may be an outlier. Companies are unlikely to make the sort of billion-dollar investments seen in pre-pandemic days, without at least some sort of reassurance that there will be returns.

“I think you’ll see new investments, though probably not of the sums they’re talking about in Japan – and even there they’re trying to reduce budgets,” Goudsmit says. “There will definitely be new projects in Europe, also Eastern Europe, and in Asia, but not for the huge amounts people talked about previously.”

Instead, that investment may increasingly be split between the physical property and its digital counterpart.

“The whole convergence between the different channels will only increase,” Goudsmit says. “The Americans – even at Sands, which of course was impossible in the Adelson days – are a bit more focused on sports betting online, with online casino secondary.

“Here in Europe, I think the casinos will look more and more at online. Companies are looking to spend their money wisely in order to get the best revenue and find the right balance between investing in the property and to have an igaming presence.

“I think the combination of the two will only enhance a casino’s business and help with customer retention.”

After all, following a year in which online has been the only way for the vast majority of European players to gamble, it’s hard for the brick-and-mortar sector to ignore online gaming in 2021.

“What we have seen, of course, is that more people have gone online because everything was closed, so people have got used to it,” he explains. “It’s difficult to say at this stage whether it will actually change the demographics of those visiting the casinos.

“But undeniably, people have been playing online. What will probably happen is that some customers will come back wanting to play online also, and that is why it’s important to have a [digital] presence.

“They learned about online, played it, and now, while they want to come back to you, if you don’t have an igaming offering, you can’t stay in touch with your customers,” he adds. “So you need that online presence, to ensure those new customers can still play with you.”

It’s not an alien concept to ECA members, he’s quick to point out. Around 63% of operators in the association have an online presence. “Things are rapidly changing and that’s a good thing in my view.”

As younger demographics come of age, having grown up in a digital world, activity in all channels will only help convergence. Even if there’s more of a shift online, this simply alters the revenue balance rather than cannibalises it.

Goudsmit argues that the whole concept of one channel cannibalising another is a bit of a misnomer. The only concern for operators should be offshore competition – and regulation helps channel the bulk of activity onshore.

“It’s only when you have illegal offers coming into your market, offering services to those who would otherwise be your customers and operate in a manner you can’t and won’t as a licensed operator, that there is genuine cannibalisation,” he says.

Ultimately, Goudsmit remains confident in the industry’s future, despite the near-term uncertainty. He believes that as properties reopen and vaccination rollouts continue, there’s reason for hope.

“The spirit is there,” he says. “Everyone wants to move on, not only the operators but also the guests; they’re waiting to come back and enjoy themselves.

“In that respect I’m confident. Hopefully once this terrible pandemic goes away and stays away, I have all the confidence for the future for our industry.”