Though based in the Åland Islands, Paf has long had a presence in Estonia, and more recently expanded to Latvia. Its chief executive Christer Fahlstedt is quick to note that the differences between the Baltic states of Estonia, Latvia and Lithuania are key to understanding the region. 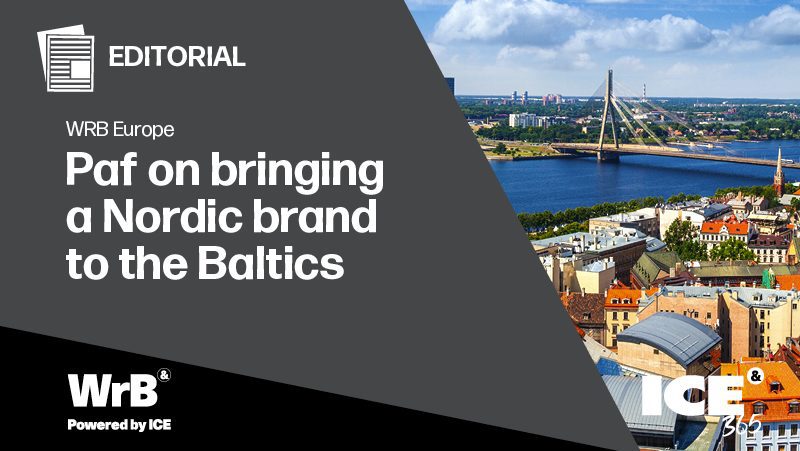 For Christer Fahlstedt, chief executive of Paf, one key lesson about the Åland Islands-based brand’s approach to the Baltics comes from a Nordic perspective.

In a collective of nations often seen as a single entity, Falhstedt notes that thinking of regions rather than individual countries can be an oversimplification. That’s a rule that applies to both the Nordic countries and the Baltic states.

The differences are not only clear, but one major difference tends to be of particular importance to a brand with a history of operating in Sweden and Finland.

For a brand with such a history in Finland, a launch in Estonia would not feel like an entirely new region of the world. In fact, Fahlstedt is quick to point out that Estonia’s national anthem, “Mu isamaa, mu õnn ja rõõm” and Finland’s “Maamme” are based on the same piece of music.

“I would say Estonia is a lot like Finland, it has a lot of things in common,” he says.

With those cultural similarities, Paf moved into Estonia back in 2004, and has plenty of experience of the market.

In Lithuania, which Paf has not entered and has no upcoming plans to enter, Fahlstedt says the differences from what Paf knows are too stark.

Latvia, on the other hand, falls somewhere in between. Fahlstedt says that there can be “friction” in the market, but not enough to mean it couldn’t do business.

The differences between the countries as places to do business, meanwhile, became clear last year.

Latvia’s gambling market – or rather its temporary absence – gained global attention, as the country’s legislature passed a bill to ban all gambling, whether land-based or online, during the novel coronavirus (Covid-19) crisis.

Fahlstedt says it’s important not to point fingers or mock decisions made at a time of emergency, though he says it has become clear that the decision had a major negative impact.

“Those most in need of protection were essentially thrown to the wolves.”

“It’s very clear that there wasn’t a justification for that and that has been recognised by the authorities,” he says. “I think it’s worth noting that it was a crazy situation for everybody. There were – in all walks of life – a lot of extreme measures being implemented very quickly, and I think you need to remember the place it was coming from when it happened.

“Now did it work? Absolutely not. Did it cause harm? Absolutely. It drove a lot of people to the black market. Those most in need of protection were essentially thrown to the wolves.

“But it’s difficult to point fingers because it all happened so fast. It was all so new and all I can really say is that it’s something that I hope we all learn from going forward. Hopefully we never have that sort of drastic situation ever again.”

Now that online gambling is available again, the impact of the ban still remains. Fahlstedt says that many players who moved to unlicensed operators are now likely gone forever.

“We – well first I would say we were very, very strict in actually enforcing those rules – but we took a very big hit on our customer base and a lot of it was lost forever,” he says. “We had to rebuild it, not from scratch but from a very low base. It hurt us a lot, absolutely.”

And some regulatory challenges still remain in the market. Latvia taxes gambling “winnings” above €3,000 at 23%, a rate that would already cause difficulties, but its decision to define all withdrawals as “winnings” makes the burden much more onerous.

“It’s a strange system that’s definitely not good, either for revenues or the market,” Fahlstedt says.

Estonia’s market, meanwhile, is generally seen as more friendly to the industry. At a time when markets with that perception are becoming more rare in Europe, Estonia is seen as one of the more friendly jurisdictions around.

Fahlstedt says that the main reason for this is a focus on technology that goes beyond the gambling sector and affects all walks of life in Estonia.

“I think Estonia is an interesting country,” he says. “They’re very cutting-edge in terms of technology across the whole country, how they do taxation for example. And the same goes for the gambling industry.

“They have a clear understanding of the fact that an unlicensed player is a very bad thing. I think it all comes from the fact that they are very skilled. They understand how things work because they are so technologically focused and have that as a source of pride.

“I think they have a highly skilled regulator that has a lot of knowledge about gambling and technology and that is a very, very rare combination. So I think it’s a good place to do business.

“Plus they’ve had gambling legislation for a long time. Over time you realise that this is the world you live in and you have to adapt to it.”

Bringing Paf’s brand to the Estonian and Latvian markets has also meant bringing one feature for which the brand has become known: its universal hard cap on losses, which is currently set at €20,000 per year.

“They think it’s a fraud or a gimmick or it doesn’t really work because they don’t trust gambling companies to have that protection in mind.”

Fahlstedt says reception of the cap in Estonia and especially Latvia has not always been welcoming, as local players and authorities often have a level of distrust of gambling operators’ motives, particularly when a move would appear to put profits at risk.

“The player base, the public, tend to be quite skeptical of initiatives like that because they don’t have the view that a gambling operator would do this,” Fahlstedt says. “They think it’s a fraud or a gimmick or it doesn’t really work because they don’t trust gambling companies to have that protection in mind. From the authorities though it’s something that’s appreciated, but there’s still some of the same skepticism.”

That’s meant the operator has spent a large amount of time trying to explain further why its limits exist.

“So there’s an educational process to educate both the player base and the authorities,” he adds.

“I completely understand a lot of the skepticism. Most companies have some sort of scheme, and to be honest I think most are not genuine, you can hide behind AI and avoid doing what you say you’ll do.”

Fahlstedt notes that much of the reasoning for those limits is Paf’s focus on long-term goals, which he says is possible because it is owned by the government of the Åland Islands.
He adds that it’s the same perspective that will define its future in the Baltics, where early success may not be guaranteed, but longer-term opportunities could be great.

“One of the luxuries we have, being state-owned and with this being our 55th year, we only ever do things with a long-term perspective,” he says. “So we had to take a long time before we had success in Estonia, and it’ll take a long time in Latvia. But that’s understood. There are very few cases in regulated markets where you’ll have instant success.”