Experienced gaming executive, regulator and consultant Richard Schuetz has worked closely with a number of tribal gaming operators in his career. He admits that gaining the trust of tribal leadership was a long process - here is his story. 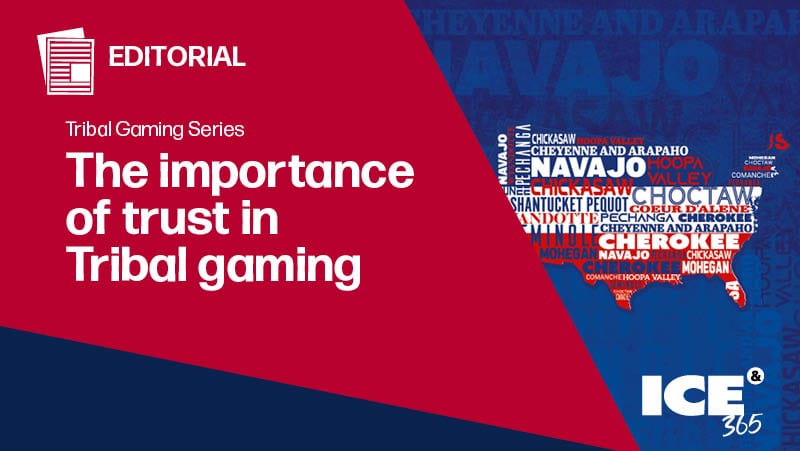 It was in 1991 when I joined Lyle Berman’s Grand Casinos in Minneapolis, Minnesota.  At that time the company had not yet gone public and was being funded by a loan from the personal bankroll of Mr Berman.

The company had a vision of working as a management company for tribal nations that wanted to enter the nascent Indian gaming market that was coming to life in the Midwest and Southern United States. I was one of two individuals initially hired out of Las Vegas who had casino and casino management experience, the majority of the rest of the company had actually come to Grand from other endeavours, mainly the retail leather business.

The underlying reality that brought about such a relationship was that the tribes had little history of understanding the challenges of running a casino facility and had serious issues in trying to raise money from traditional financial providers. Traditional capital markets were just not available to the vast majority of tribes at this time.

I believe the Grand Casinos story was a successful story both for the company and our tribal partners. During my tenure with Grand we managed four tribal facilities for three different tribal nations.

After being directly involved in these operations for four years, I was invited to speak at an executive development program held at Lake Tahoe. The title of my speech was “Stupid college-educated white folks.”

The whole point of the speech was to tell on myself for the myriad of realities that I did not understand about tribal history and culture, and, as mentioned, this was after four years of having been involved in the tribal world. While it seemed that while working with the tribes I learned something new every day – there was just a lot to learn.

One of the most fascinating people I met during my time with Grand was Marge Anderson, the Chief Executive of the Mille Lacs Band of Ojibwe, our first tribal partner. Ms Anderson was as impressive as any head of state who I had either known or studied. My respect for her was unbounded.

Prior to the introduction of the casino, the Mille Lacs band was in trouble. More than 65% of the tribal population existed below federally established poverty levels.

A whole gamut of social ills were plaguing the tribe with the usual suspects of alcohol and drugs taking too great a toll on the tribal population, especially the males. Un- and underemployment were rampant, many tribal members lacked access to reliable  transportation, and on it went.

As a result of these challenges and the difficulty tribal members had in accessing quality healthcare, the tribe was struggling with survival every single day.

One of the more touching conversations I had during this time was with a tribal woman who was a dealer standing at a dead “21” game in the casino. I asked her what the casino meant to her and her response was that for the first time in her life she could dream of her children getting a good education. That statement touched me in a profound way, and made me feel good that my gambling career had taken me into the tribal world.

As Grand Casinos grew, we made the decision that we wanted to diversify into commercial casino ventures as well as expanding our tribal footprint. At that time, much of the country was contemplating allowing new casino developments and we wanted to be a part of this.

We needed to share this decision with our tribal partners, the Mille Lacs Band, and secure its support for our future endeavors. We did this by creating an equity position in Grand Casinos, Inc. for the Mille Lacs Band. It was this reality that led to the Mille Lacs Band’s chief executive, Ms. Marge Anderson, to accompany us on an investor road show to New York City.

During one of our presentations in New York City, one of the financial analysts at a session, dressed in the seemingly mandatory dark suit with the slicked-back over-moussed hair (that seemed so popular back then), and the obligatory black backpack, asked a most interesting question, and the question was “how do you know you can trust the Indians?”

There was a bit of silence in the room, and then chief executive Marge Anderson stood up in her own most dignified way. For the next 10 minutes she continued standing and she talked about trust. She talked about the theft of land and lives that had been visited upon the Indian nations located in the area now called America.

When Ms Anderson was done, the room was silent. There was not a follow-up question.

I will never forget that incredible moment. It changed everything.

During my time with the tribes during the 1990s, I never sensed that the tribes trusted me. It was nothing dramatic or explicit; it was just a feeling that was often there. I did not understand it and it made me feel uncomfortable at times. After listening to Marge Anderson, I understood.  I finally got it.

From that moment forward, when I walked on tribal land, I walked with respect for the land I was on. I clearly understood that when I was on the reservation, I was on a sacred space.

When I joined Grand I did it to make some money and help the Indians. What I learned was that the tribes gave me riches beyond my imagination – and  they were the ones helping me.

Many years later, while a commissioner for the California Gambling Control Commission, I was living and working in a state with over 100 federally recognised tribes. At that time, California also had in excess of 60 compacted tribal casinos, and I was often involved at some level or another with one of these tribal projects.

One day I received a call from the attorney general from one of the tribes, a gentleman who was a tribal member. He was complaining to me about one thing or another that the California state government had done. After listening to him for a bit, I finally asked him why was he was bringing this issue up with me for it had nothing to do with the commission.

His response was: “Hell, I had to talk to someone about this and I trust you.” That was such a nice thing to hear.

With the tribal nations, trust has to be earned and the process is slow.

Now you’ve read Richard Schuetz’s thoughts, have you say through the Tribal Gaming Survey. This project sees ICE 365 collaborate with Pechanga.net, to gather opinions from tribes on the future of their gaming industry. It’s open to all tribal gaming operators, so share your thoughts here.

Richard Schuetz is the owner of Schuetz LLC, a gaming and regulatory consulting entity. He has worked in the casino industry for close to 50 years and his previous roles include executive director of the Bermuda Casino Gaming Commission, commissioner of the California Gambling Control Commission and president and CEO of the Stratosphere Tower Hotel and Casino.