The fact that tribal government gaming is used to fund tribal communities is often highlighted as the sector’s clearest differentiator from commercial gambling, writes Professor Kate Spilde. However, she writes, the model pursued by the tribes could be viewed as a blueprint for sovereign nations to take a more active role in legal gaming. 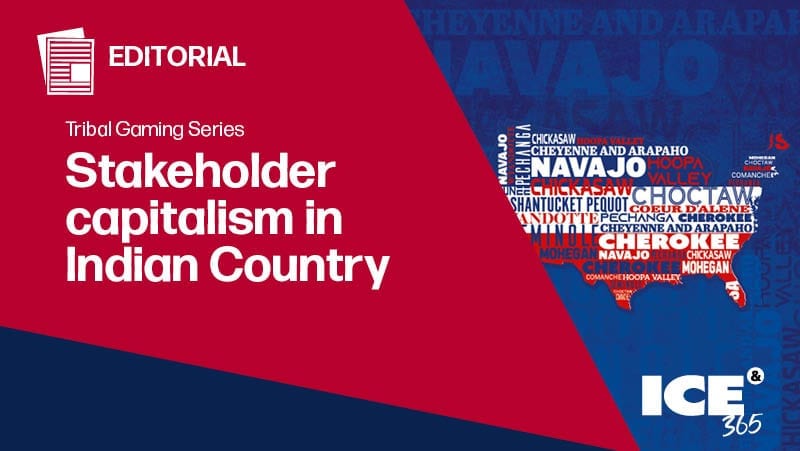 While the world remains mired in a global pandemic, the reality of unequal access to basic government funding and services, vaccines, healthcare and housing has dominated headlines and exposed the underlying structures that create and sustain inequality across cultures and continents.

Democracy itself is in question amid increased criticism of democracy’s reliance on capitalism. In today’s uncertain times, the very definition and purpose of capitalism is also being debated.

What is astounding about Keynes’ seemingly jaded description of capitalism is the expectation of a direct link between capitalism and the public good, regardless of our fallibility or the nature of industry.

Of course, this implied balance between the system and the outcome is famously at odds with economist Milton Friedman’s position that, “there is one and only one social responsibility of business–to use its resources and engage in activities designed to increase its profits so long as it stays within the rules of the game.” More than 50 years later, Friedman’s original essay remains controversial.

As legal gambling expands (and moves online) around the world, various industry segments have rallied around discussions of “responsible gaming” and the obligations of the gambling industry to reduce or eliminate harm to players.

While gambling publications or conferences rarely address the question of which nations or jurisdictions are most likely to adopt and legalise gambling as an economic development tool that balances returns with social responsibility, this historical moment is an ideal time to highlight what I see as the global model for the gambling industry in general and responsible gambling in particular: the unique and underappreciated model of stakeholder capitalism developed by American Indian tribal governments in the United States.

As an educator, I am grateful to have the opportunity to study, visit, write about and share my understanding of tribal government gaming and the ways that it offers a best-in-class example of stakeholder capitalism. One in which the “state” and “business” are mutually reinforcing entities that achieve the creation and redistribution of wealth at the same time.

For example, it is generally agreed that while tribal governments created the tribal gaming model in the 1970’s, the regulatory structure of the $39bn industry today is generally guided by a 1988 federal law, the Indian Gaming Regulatory Act (IGRA.)

What is less understood and agreed upon are the ways that IGRA reflects pre-existing tribal government policies for gaming revenue investment, which can best be understood as a cultural form of what mainstream observers call stakeholder capitalism.

While governments are generally understood as inefficient business partners or innovators, they are equally criticised if they focus too much on redistribution of wealth and not enough on supporting a system that generates profits. If governments over-regulate, they are scolded for stifling the free market system. If they shift to a more laissez faire system, they are accused of being ineffective administrators who let rent seekers take more than their fair share.

However, this dynamic is often overlooked because outsiders do not appreciate or understand the demands on tribal governments to operate profitable businesses as a form of government revenue generation.

Tribal governments are successful and patient innovators who create and invest in dynamic industries in ways that leverage their unique legal and political status as domestic sovereigns – and gaming is the most visible example.

Over the last three decades, more than two hundred tribes with gaming in the United States have developed a unique structure wherein the tribal governments realise the risks and rewards of innovation, investment and business operations.

They achieve this delicate balance by authorising, regulating and operating casinos while also redistributing the revenues from these businesses into the public good, both among their own communities and with their neighbours. Tribes have achieved something other governments can learn from: how to unleash a nation or government’s potential as an economic engine without reliance on taxation.

So how do tribes do it? Mainly, through a separation of business and government functions, with a clear sense of shared purpose between the two. Unlike commercial casinos in Nevada or other state-regulated markets, tribal gaming facilities are specifically designed to generate revenues for tribal governments to operate.

The tribal government passes the gaming ordinance, creates the regulatory body, secures the funding, hires the managers and stabilises the “rules of the game” through relationships with federal and/or partners (whether a governor, representative of the National Indian Gaming Commission or other actors).

Private or publicly-held companies are expected to return profits, so executives are usually under pressure to focus on short-term performance and maximising shareholder value. The corporate gaming model contributes to the public good indirectly and to a smaller degree through corporate taxation and/or corporate social responsibility and voluntary charitable investments.

While there are pressures on corporate executives to take action related to social justice movements or to sign pledges related to stakeholders’ well-being, the primary purpose of corporations, including commercial casino companies, remains profit maximisation on behalf of shareholders.

Tribal governments, on the other hand, have a commitment to invest in sustainable long-term projects for the tribal public good: social programs and projects that offer services and support to tribal citizens, including infrastructure development, housing, education, health care and public safety.

A model for new jurisdictions

As gambling continues to expand around the world, and online, the tribal government gaming model has much to teach us.

Rather than simply license and tax new gambling segments, other nations should  explore their own willingness to enter the industry as dynamic economic actors, possibly sharing the risk and rewards of legalising gambling rather than shifting them exclusively to corporations through mixed messages about maximising profits while minimising wickedness.

While the rest of the world debates whether stakeholder capitalism is the right way or the wrong way to do business, for tribal governments in the United States, it is the only way.

Now you’ve read Dr Spilde’s thoughts, have you say through the Tribal Gaming Survey. This project sees ICE 365 collaborate with Pechanga.net, to gather opinions from tribes on the future of their gaming industry. It’s open to all tribal gaming operators, so share your thoughts here.

Dr. Kate Spilde is Professor of Hospitality and Tourism Management at San Diego State University and a leading authority on tribal economic development in the United States. With a Ph.D. in cultural anthropology and an MBA in entrepreneurial management, Dr. Spilde has worked on public policy and tribal governance in several positions, including Policy Analyst for the National Gambling Impact Study Commission, Director of Research at the National Indian Gaming Association, Sr. Research Associate at Harvard’s Kennedy School of Government and Executive Director of the Center for California Native Nations at the University of California in Riverside (UCR). Dr. Spilde has served as Endowed Chair of the Sycuan Institute on Tribal Gaming at San Diego State University since 2008, where she designed and still teaches all five courses leading to the nation’s only Bachelor of Science degree in Tribal Casino Operations Management. An award winning teacher and scholar, Dr. Spilde has published more than 50 academic articles and has worked with tribal, state, federal and foreign governments on economic development and gaming for over 20 years. She also sits on the Board of Directors of the National Center for Responsible Gaming, the only organization devoted to funding research that helps increase understanding of gambling disorder.