Tribal operators often stick to gaming on the tribe’s own lands, but Mohegan Gaming and Entertainment has made efforts not just to expand its footprint across the US, but to operate sites abroad as well. International president Bobby Soper explains how the operator has broadened its reach into Europe and Asia. 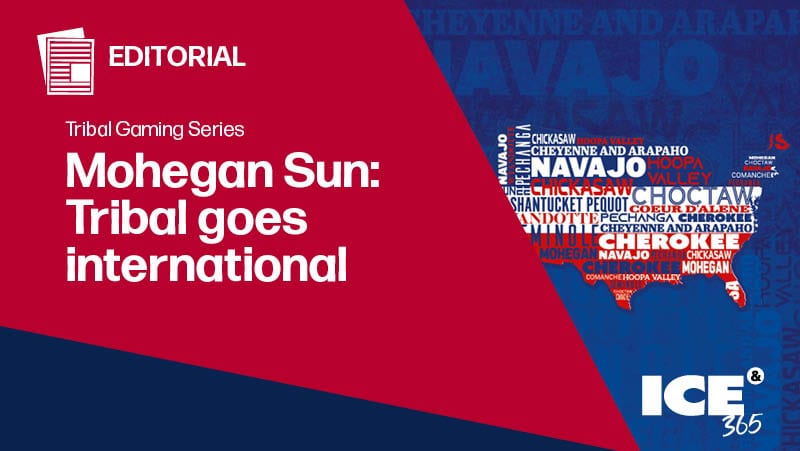 The proposed site for an integrated resort in Nagasaki, Japan sites more than 7,000 miles from the Mohegan Indian Reservation.

Incheon Airport in Seoul is a little under 7,000 miles from the reservation, while Athens is almost 5,000 miles away.

Well outside the US, they may not appear to be obvious sites for tribal casinos, but Mohegan Gaming and Entertainment in recent years has sought to bring its operations to new sites off the reservation and often outside of the US entirely.

To Mohegan international president Bobby Soper, that decision to spread out was rooted in a concept that was very important to the Tribe: ensuring sustainability in the extremely long term.

“It was always the tribe’s strategy that, first, we wanted to focus with our core competency which is hospitality, entertainment and gaming, but we also wanted to diversify,” Soper says. “And it was important for the tribe, looking many generations ahead, we like to say 13 generations ahead, to ensure that our economic enterprises were sustainable over time.”

However, success of that site meant that not only did the operator expand the resort twice, bringing it from a typical regional casino to what Soper calls a “somewhat integrated resort”, but it also took steps to expand further.

First, that meant within the US, with properties in Louisiana, Washington, Las Vegas and Atlantic City, all of which Soper says have shown impressive resilience amid Covid-19.

From there, the operator has now made efforts to expand internationally.

This too started methodically, with the Niagara Fallsview Casino Resort barely over the Canadian border.

But Mohegan’s international expansion is now in full swing, with work underway for a resort at Incheon Airport in Seoul, South Korea, while Mohegan won the licence to operate a resort in Athens, Greece and is currently part of a bid for one of Japan’s first integrated resorts, in Nagasaki.

“We were not mature enough as a caino company when Macau took off, when the licences were issued, but we wanted to participate in the largest global market and Korea presented an opportunity and Japan presents an opportunity,” Soper says.

Entering new markets means knowing new customers. Soper argues that tailoring the operator’s offering to each region has been an important part of the Mohegan international project.

For the $5bn Seoul resort set to open in H1 2023, that meant focusing on non-gaming amenities such as nightlife and meetings, incentives, conferences and exhibitions (MICE).

“It is a foreign-only casino, but the focus is really on non-gaming amenities,” Soper says. “There is a tremendous opportunity in that market, a tremendous under-supply of many of these amenities.

“Greater Seoul has a population of over 23m, and yet they don’t have so many of these amenities.”

Meanwhile in Greece, the planned resort would take advantage of a lack of integrated resorts in Europe, and this combined with its location in a popular tourist destination, means Soper sees it as a possibility to attract customers across the continent.

Alongside catering new customers, however, is the need to navigate new regulatory challenges.

In Japan, the years-long process to open a series of integrated resorts could be complex, but the local partner making the bid can help ensure this journey is smoother.

In Mohegan’s case, the operator is a part of Oshidori International Holdings’ bid. Soper says that with Oshidori – as with any partnership such as with GEK Terna in Greece – the most important factor was knowing that both partners bring something to the table.

“There’s a number of things to determine,” he says. “The project, the location, does the partnership make sense, is there chemistry, but is there also a complementary relationship. In Japan, all of those boxes were ticked with Oshidori.

“We really like what they’re putting together. We like the location, and their bid was consistent with our business model of the integrated resort and how we utilise all these assets: Oshidori gets all of that. We really felt like there was alignment.”

“With any partner we work with, we want to know, is there alignment, and are there complementary contributions from each party.”

But any move off of the reservation means a significant change legally, as the operator must work with new governments and authorities. In that sense, Mohegan’s ventures outside of Connecticut could look similar to the work of any commercial operator.

“There’s necessarily a really clear distinction between how we, as a Native American operator, do business with regard to these sites and how a commercial operator might do so,” Soper explains.

“We understood that when we went off the reservation back in 2006, that at the end of the day, one of the tradeoffs of growing outside of the existing assets is that ultimately you’re submitting yourself to the sovereignty of other jurisdictions, and for us it was worth the tradeoff.

“But of course that means you have to operate like a commercial operator.”

Yet he adds that Mohegan’s tribal background still plays an important part in everything Mohegan does, and says this is something that has helped the operator work with both partners and authorities, even in countries without tribal gaming.

“But there are certain values that are central to this tribe and are reflected in our operations, perhaps how we interact with our partners locally, such as government or the private sector,” he continues. “And we’ve found that in Asia in particular, there’s been a lot of appreciation of our history. There’s a sort of profound respect.

“From an operations standpoint it’s very similar, but the DNA of who we are, how we’ve evolved over hundreds of years, not just tens of years, that’s the greatest distinction.”