Parimatch started as a retail bookmaker in Ukraine in 1994, but its ambitions within its home country were hampered by the country’s ban on gambling, implemented in 2009. But after the country opted to re-legalise a wide range of gambling activities last year, chief legal officer Ievgeniia Derbal discusses the operator's return home. 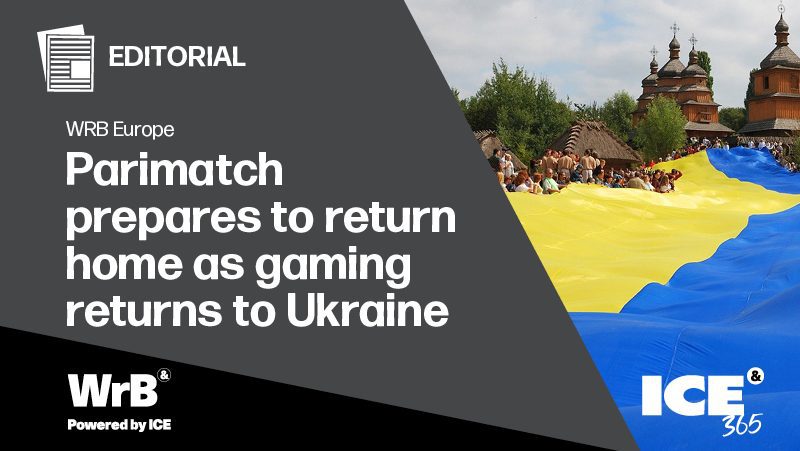 For most operators, a new market entry means a new experience and learning about customers and doing business in a brand-new jurisdiction.

But for Parimatch, entering the Ukraine market this year meant returning home.

Parimatch was founded in Kyiv in 1994 as a retail bookmaker and established itself as a major betting brand in the country.

However, in 2009, a fire at a gaming arcade led to the country banning all gambling. With that, Parimatch had to leave the country.

However, Parimatch chief legal officer Ievgeniia Derbal points out that the timing was not terrible for the brand, which was working on its expansion following entries into new markets such as Cyprus, Belarus, Kazakhstan.

“It did obviously force us to leave, but the brand was focusing on development outside of Ukraine, looking at local licenses elsewhere and diversifying to reduce risks,” she says.

More than ten years later, gambling in Ukraine is once again permitted. In a drawn-out process, a bill to re-legalise gambling was first introduced in 2015. Then in 2017, the country’s government pledged to regulate the market by 2018.

However in 2019, pressure grew, as a new government led efforts to introduce a comprehensive bill permitting online casino, both retail and online sports betting, slot halls and land-based casinos at hotels.

That bill was eventually signed into law in August 2020.

And Parimatch, now with plenty of experience operating in other markets, was among the first operators to earn a licence: including receiving Ukraine’s first sports betting licence under the new regime.

Returning to a market means more familiarity with the profile of customers Parimatch is hoping to reach. Derbal says that in Ukraine, customers are particularly into sports betting, especially when it involves the rising vertical of esports.

“They have their own preferences in terms of the games and sport they are into. Sports betting is preferred there, and – like a lot of other countries – football would be number one in Ukraine,” she explains. “There are lots and lots of products in this area that are popular.

“But then esports are really getting extremely popular in Ukraine, not just betting but also that people love to play the games themselves. I think a lot of people are looking at what’s going on in this industry and are seeing it could be a real opportunity. Fantasy sports also is under development; it’s getting its popularity.”

And as Derbal is quick to note, Ukraine’s population of 40 million make it one of the ten largest countries in Europe, meaning that there are plenty of the customers in question.

A further feature of Ukraine’s population is a strong level of tech knowledge. The country has become somewhat of a tech hub for Eastern Europe, both in gambling and beyond. Derbal notes that a recent bill to create a specialised tech zone around the Unit.City innovation park in Kyiv, with government benefits intended to prioritise innovation.

“Countries registered there will receive lots of benefits in intellectual property law, tax law of course, libour law and others,” Derbal says. “That’s something we’re looking at taking advantage of.

“Since Ukraine is really rich for this kind of specialism, we think it’ll be a really great boost for the market and help lots of foreign companies enter the market. That could be really strong for the country in general.”

Being an early entrant in a market – as Parimatch is – can come with challenges, especially, as in Ukraine, if there are reasons why few others have entered the market yet.

The country is still considering a bill to set gambling taxes at 10% for all verticals. Until that bill is signed into law, taxes will depend on vertical, with online gambling taxes set at 18%.

In addition, the tax law would remove a provision to temporarily set licence fees at three times the normal rate, which is already high at $5.1m for a five-year betting licence.

That means that while other operators therefore look set to pay the $5.1m fee, Parimatch had to fork over a fee three times that total in order to gain access. The extra costs are set to be reimbursed through reduced future licence fees, but the upfront cost is still substantial.

She adds that being the only operator within the channel leads to increased regulatory scrutiny.

“It’s a big responsibility to be the first. Of course there are a number of advantages in advertising and marketing strategy: you can be the only person advertising.

“But then there’s the responsibility,” she adds. “Being the first, you have to be the best, and I’m talking here about all the rules and conditions, AML checks, compliance checks, responsible gambling, KYC checks. All those have to be perfect.”

However, it may also allow for a large degree of influence in shaping regulations. Derbal says the operator is talking to the government and regulator the Commission for the Regulation of Gambling and Lotteries (KRAIL) to try to ensure strong but balanced regulations going forward.

“We are focusing a lot now on responsible gaming,” she says. “It’s somewhere where we are supporting the government of Ukraine and the gambling commission in order to develop proper and balanced rules for responsible gaming.

Derbal noted that in this case Parimatch could call upon something unusual for a country only just entering its home market: its experience elsewhere.

“We’re really using our experience from other countries with all of that and I hope that our efforts will be good.”