Novomatic’s Löwen Entertainment has established Novo Interactive as the unit that will lead its foray into Germany’s online market. As managing director Dr Daniel Henzgen points out, limited advances online have been accompanied by retrograde steps for land-based operations. 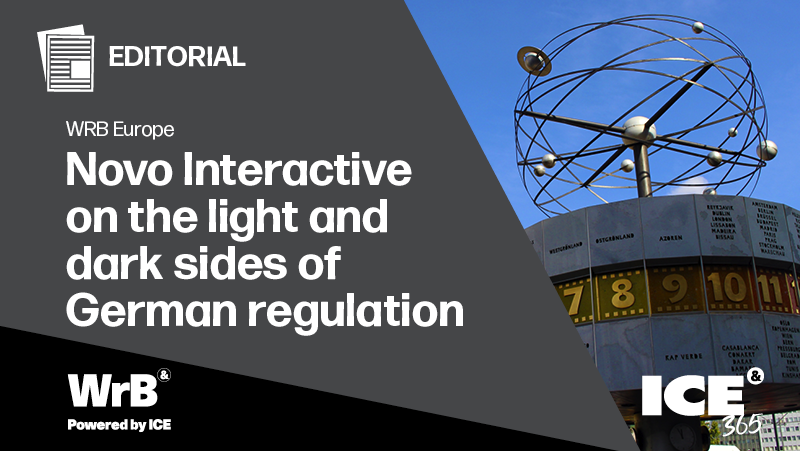 Novomatic is working on multiple fronts to take advantage of German re-regulation. Its interactive arm Greentube has returned after a four-year absence as both an operator – with StarGames – and as a B2B provider.

Its core German-facing subsidiary Löwen Entertainment, operator of the Admiral brand, has also moved in via its own B2C slots site Novoline, which joins its Admiralbet sportsbook in the market.

The business’ commitment to online is reflected in the fact that its Admiral Sportwetten unit has been rebranded as Novo Interactive, while its management team has been strengthened by the appointment of Dr Daniel Henzgen as managing director.

Henzgen, who retains his duties at Löwen Entertainment, has been brought in to handle marketing, politics and communication for Novo Interactive alongside fellow managing directors Oliver Bagus and Jürgen Irsigler.

“A phenomenon of contempt for gamblers”

Even before officially began his role, on 1 July, Henzgen hit out at the restrictions imposed in the Glücksspielneuregulierungstaatsvertrag (GlüNeuRStV). He argued days before the Treaty’s implementation that land-based restrictions betrayed a “phenomenon of contempt for gamblers and gaming providers” that had dogged German regulatory discussions.

The tightening restrictions on the land-based industry have already seen Löwen shutter its 17 Admiral-branded sportsbooks in May last year, at a time when they were already closed due to Covid-19. This, he says, was a consequence of years of regulatory stasis.

“It is the result of German gaming regulation, which has led to an uneven playing field for stationary providers,” Henzgen explains.

“As a private sports betting provider based in Germany, we were at a clear disadvantage here, and the Covid crisis has further exacerbated this inequality,” he continuess. “That is why, after weighing up all the economic and legal aspects, we decided to close the Admiral sports betting outlets in Germany.”

While this leaves it with a strong gaming hall estate and gaming machine business in the land-based channel – more than 520 outlets under the Admiral Spielhalle brand – there are concerns about these venues, too.

The problem with minimum distance

Henzgen argues the state-licensed arcades are being “discriminated against”, due to “antiquated” minimum distance requirements at a time when online play is becoming more widely available.

This has seen Länder set varying limits on the distance between gambling venues, which in some jurisdictions is forcing legal providers from the market. The capital Berlin has been particularly aggressive, with the Berliner Spielhallengesetz set to shutter all but 120 of the city’s existing 496 outlets, and slash the number of gaming machines in operation – a move that has also drawn Löwen’s ire.

“The example of Berlin […] shows where such a rigorous policy can lead: The closure of state-licensed gaming arcades there has led to a massive increase in illegal operators where there is no protection of players or minors,” Henzgen says.

Baden-Württemberg, he adds, is pursuing similar controls that are likely to affect up to 80% of the state’s arcades, putting around 8,000 jobs at risk.

This is a consequence of the regulatory debate around restrictions on legal gambling failing to acknowledge hard facts, Henzgen argues.

“One example for such a false dogma is that more supply leads to more problems,” he says. “We at Löwen Entertainment are convinced that problems can only be solved in a socially responsible manner if they are explained and dealt with on a sound scientific basis.

“Gaming has always been part of human history, and for centuries people have found diversion and entertainment in playing games,” Henzgen continues. “Attempts to combat this with bans and the marginalisation of legal high-quality offerings only ever strengthen the black market and illegal, uncontrolled gambling.

“That is why we have always advocated a clear legal framework with strict player protection standards.”

And while these conditions are offset to an extent by the online slots and poker market following the long-awaited issuance of sportsbook licences in October 2020, this is not the widespread liberalisation many had hoped for.

For example, March 2020’s announcement that the Minister Presidents of the 16 Länder that a broader framework in which online casino would be permitted was widely welcomed.

“A positive aspect is that the market for online gaming has been opened up and that we, as a German company, can participate in this important growth market,” agrees Henzgen.

The regulatory framework that emerged during that month, however, showed that slots were subject to a €1 per spin stake cap, and a minimum spin duration of five seconds.

For table games lotteries, then land-based operators, were given first refusal. Then there is a hefty 5.3% tax on slots and poker turnover for licensees to contend with.

“The regulations for legal online gaming are indeed very strict,” Henzgen adds. “With measures such as these, policymakers are unfortunately failing to achieve their goal of using sensible regulation to steer consumers’ gaming needs in an orderly direction and to strengthen the legal providers with their high standards of protection for players and minors.”

While the conditions may be difficult, Novo Interactive has moved to make a splash with Novoline. It has rolled out popular proprietary Novomatic titles such as Book of Ra and Sizzling Hot, as well as new launches such as Twin Spinner and Sizzling Hot Deluxe.

Novo Interactive, through its AdmiralBet brand, was one of the first operators to receive a sports betting licence, in October last year. Henzgen points out that in recent months “the market has certainly been very much under the influence of the [Covid-19] pandemic”, but says he remains optimistic about the online betting business’ prospects.

Considering the difficult conditions operators face as operators and players come to terms with regulatory measures that significantly alter the look and feel of legal gaming offerings, the industry is facing significant challenges under the GlüNeuRStV.

However, Henzgen says that after “very intensive” preparations for launch, he remains confident that Löwen Entertainment can parlay its success in land-based gaming online: “With Novoline, we are creating an offering that transfers our strengths from terrestrial gaming to the digital world: games that excite and inspire.”