The launch of iGaming in the Netherlands has been a long time coming, but after years of delays, it will open for business from 1 October. Nosa Omoigui speaks to Justin Franssen to find out what the industry can expect when they go live. 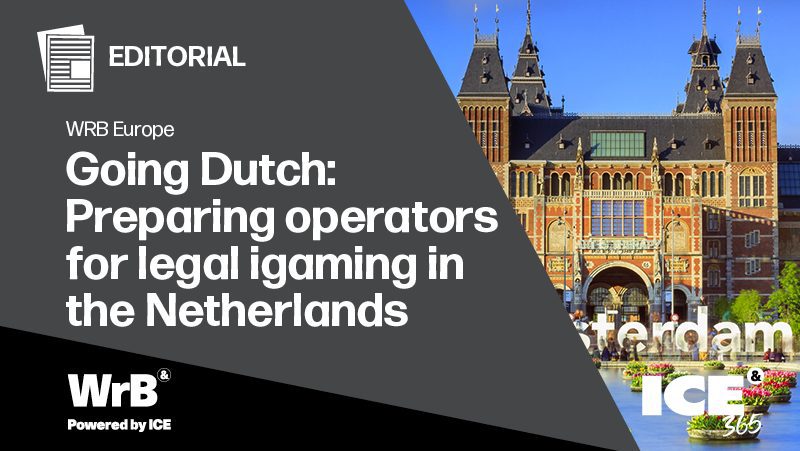 Operators champing at the bit

Whilst the Dutch regulator de Kansspelautoriteit (KSA) has already received 28 licence applications – and expects to grant up to 35 licences in total – as Kalff Katz & Franssen founding  partner Justin Franssen has seen first-hand, those numbers are only just scratching the surface.

“If you look at what the regulator has said in the past, I think they expected between 50-80 applications in total,” says Franssen.

“The market opening will be gradual rather than a big bang. We’ll have a first batch of operators who applied before the 15 April, and those are ‘squeaky clean’ operators in the sense that they’ve never entered the online market. There’s also a handful of overseas operators who have never touched the Dutch market.”

Operators who submitted their applications in April should be able to go live in early October. Franssen expects around two thirds of all potential applications to come at a later date roughly six months after the initial April cut-off, leading to another wave of applications between October 2021 and March 2022.

In practice, the handling of an application normally takes about 6 months,” Franssen adds.

“The second wave of applications – from October onwards – will come in six months later so expect the second wave of launch dates to happen around March. It remains to be seen how many licences will actually be granted.”

Any potential operators will also have to have adhered to a cooling off period; a 33-month time frame prior to their application, where they demonstrate that they can passively exist within the Dutch market.

During this time affiliate marketing and the use of Dutch payment instruments are prohibited, and prospective licensees must also show they have visible age verification measures in place upon registration. Those considered to have breached these conditions will simply have to wait.

This means that the Netherlands iGaming market will effectively have two launches – the first one in October, and another one in 2022 when all operators are up to speed. Franssen also notes that the cooling off measures act as a way to grant temporary leniency to operators.

“The ground position is that if you’ve been illegally in the market, it weighs heavily against operators in the assessment of their suitability. Politically this led to a number of problems,” he explains.

And if operating illegally market is going to count against an application, this would disqualify the majority of international competitors as they have been, and to a large extent still are, in the Dutch market – albeit passively, Franssen says.

So the government have decided to be temporarily lenient on these operators who continue to be passively available in the Dutch market. This temporary leniency expires one year after implementation of the Remote Gaming Act (1 April 2021) on 31 March 2022. Operators who want to enjoy the leniency of the cooling off criterion should be able to demonstrate 33 months of cooling off upon their license application.

When all operators are in play, it remains to be seen how well-established names within Dutch gaming compete with new competition at home and overseas. The likes of Holland Casino and the Nederlandse Loterij (NLO) will find themselves in uncharted territory, in the sense that they my come up against stiff, legal competition.

“On one hand Holland Casino and NLO are well established brand names so in theory they should do quite well,” Franssen says.

“They also have a bit of a head start in terms of when they can go live with their legal offering compared to the rest of the market.

“On the other hand, I’m not expecting a situation similar to Denmark where the Danish state monopoly Danske Spil got a dominant market share,” he adds. “I think the main reason for that is that they could cross-market their existing land-based database to their online offering, which is something that is specifically prohibited under Dutch law. Holland Casino can’t use its existing database for their online customers, which is obviously a disadvantage.”

Any international operators are also playing catch-up due to compliance with cooling off protocols, meaning they not only will have to build  database from scratch, but brand recognition will also be diminished. The brand recognition and easy market access enjoyed by the incumbents could therefore be a key factor to the bigger names in Dutch gaming gaining a strong foothold in the market.

The Netherlands are fortunate to be in a position where so many iGaming markets exist in different jurisdictions around Europe, giving them a solid framework from which to build on. The challenge remains to create a market that is specifically for players within the Netherlands, rather than just being a carbon copy of an iGaming market from a different country.

“If you look at the economics of the Dutch market, what we’re consistently hearing from clients and industry stakeholders is that the average player value in the Netherlands is exceptionally high compared to other jurisdictions,” Franssen adds.

“Most of the regulations are based on the same principals of player protection, prevention of fraud and so forth. Somewhat unique in the Dutch context is the active duty of care, meaning that operators are obliged to intervene in player behaviour.

“It’s difficult to see how it’s going to pan out in reality, as there’s an inherent conflict of interest between the commercial interest of the operator against the obligations they have based on the regulations.”

Whilst the market launch is an exciting time for the Netherlands, there are still concerns about market practices when things are up and running.

KSA chairman René Jansen expressed his worry at a possible “bombardment of advertisements” that could arise when operators attempt to market their products. “The experiences abroad have hopefully taught us that the industry itself also has a responsibility,” Jansen said back in May.

“Do not look for the edges; advertise in an appropriate and responsible manner. We have a common interest in ensuring the proper legalisation and regulation of online gambling.”

“I think he’s consistently getting across his message. What he’s saying is that operators should take their own responsibility,” Franssen sympathises.

“What we’ve seen in other jurisdictions such as Belgium, Sweden, the UK and Italy, if operators don’t take their responsibility and exaggerate with the intrusiveness and amount of advertising, then this will lead to political backlash, public outcry and measures by the powers that be.”

Advertising will be necessary for new brands within the market, though Franssen understands Jansen’s warning that promotion should be kept to moderate levels, so as to prevent government intervention.

“It’s a call to the industry to prevent this from happening through self-regulation and self-limitation – that’s what he’s [Jansen] pointing to.”

Other risks exist for the market, in addition to advertising. Gambling levies have been raised for the first time since 2012, and are set to be fixed for the next decade. Hefty taxes are an inherent risk for any market – as hikes in Italy and Denmark, and Germany’s 5.3% turnover tax on slots and poker demonstrate. The tax rate for the Dutch market currently stands at 29% of gross revenue, which Franssen admits is not ideal.

Franssen also believes that another issue may be caused by the way the legislators have drawn up their guidelines. Despite being heavily shaped by strict rules, any ambiguity could lead to misinterpretation on the part of operators, which could see many of them end up in trouble.

“The trouble is that the regulator doesn’t always provide a detailed explanation at this stage on how certain rules should precisely be interpreted,” he says.

“They leave it to the operators to some extent to interpret the rules, and a concern I generally have is that once the market opens, this will open the floodgates for enforcement.”

He draws a parallel with Sweden, where the regulator did not respond to any queries from operators during the application process. Many see this as having led to a wave of enforcement activity since the market opened in 2019.

“The situation here isn’t as extreme as Sweden,” Franssen says, however. “Luckily the gambling authority is to a certain extent answering question via Q&A’s on their website, but not in all cases.”

As well as the legislation being ambiguous at points, there’s also trepidation that some policies in place may be outdated by the time the market launches.

This is in part due to the delayed nature of the market launch – discussions on igaming regulation stretch back more than a decade – but excessive bureaucracy during the drafting phases may also have had an impact, Franssen says.

It is hoped that by the time the review of the Remote Gaming Act comes around in three years, any issues with policy can be ironed out and improved upon to ensure that the market thrives in the way people had hoped.

The Dutch igaming market opens for business on the final day of iGB Live! so what better time to get some last minute insights from leading figures? Our expert panel at iGB Live! will be discussing the Netherlands in Embracing regulated igaming: Netherlands focus – register here to book your place.