As 2017 gets underway iGB talks to leading igaming experts to hear what they believe will be key developments for our industry in the next 12 months. 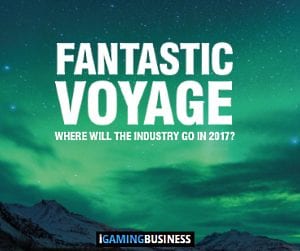 As 2017 gets underway iGaming Business talks to leading igaming experts to hear what they believe will be key developments for our industry in the next 12 months.

Shay Segev, chief operating officer, GVC Holdings
M&A – 2016 was the year of consolidation with a number of high-profile deals including, Paddy Power and Betfair, Ladbrokes and Coral and, of course in our own case, the

acquisition of bwin.party. Then there were the deals that got away such as 888 and Rank’s approach for William Hill. With regulation marching ever onwards – a trend that is to be welcomed when done right – big becomes more and more beautiful. And as the demands of greater taxation and increased technical requirements become more onerous, scale and resources become vital for an operator’s long term success. For that reason we can expect industry consolidation to remain a key theme in 2017.

Regulation – Looking across the world you can identify two broad trends in regulation of the sector. First, it is spreading. Online regulation appears to be evolving at a faster pace than at any time in its history. Continental Europe in particular is seeing significant change, with Bulgaria, Czech Republic, Netherlands and Poland to name just a few that have seen new regulation or are in the process of change. Second, administrators and campaigners in already regulated markets are showing an increasing appetite for intervention. The most obvious example is the UK and the current reviews into FOBTs and advertising, but it is happening in a number of other territories around the world.

Mobile and product development – With smartphones/tablets now ubiquitous in the developed world and data speeds improving all the time, we are already long past the point when having a high quality mobile offer is essential to an operator’s success. In 2017 we can expect to see even greater innovation on the platform, with increased personalisation and game recommendation likely to be major trends.

Content – It is easier to create games than in the past. As a result, the industry will offer more in-house and branded content this year from a whole spectrum of suppliers., making it even harder to get those unique standout games that will become this year’s big hit. We will see more and more sequels to games. Games will become less relevant as standalone products, and more so as part of the wider platform offering via jackpots, loyalty programs and gamification, giving the offering more context. Suppliers will introduce back-end features and functionality enabling operators to offer smarter bonusing.
Regulation. Regulators in some instances will realise some of the negative impacts and attempt redress, such as in poker, where shared, cross-border liquidity could be introduced in certain markets, albeit slowly.
Operators – Large operators will seek new markets in which to grow due to regulation stifling expansion of existing territories. Retail operators in Eastern and Central Europe and other territories such as South America will expand, eventually joining the ranks of the leading international online operators, as players trust retail brands they know and will convert through mobile from retail into online.
Players will seek faster, more on-demand solutions across all products and channels, in particular in mobile.
Personalisation will become more relevant due to consumer demands and behaviours, affecting front’ and back-end technologies. Products will become ‘smarter’, learning from and responding to player behaviours and characteristics. The focus on UX will grow significantly.

Software –  Every retail operator will have a comprehensive omni-channel business becoming a simple, ordinary part of our day-to-day gaming as products and platforms become smarter and player journeys become more seamless.
Platform – With content so accessible, quality of platform will be the key differentiator between a good and an excellent operator. With competition growing, even the very biggest will find it hard to lead the market from a platform perspective. It will be up to the most innovative and influential suppliers to provide platforms that can grow alongside and adapt to new technologies and trends.

Simon Holliday, Founder, H2 Gambling Capital
H2 expects 2017 to be a year of clarity rather than new market activity. We expect more to be known regarding regulations/time scales for a number of major new or newly

regulated markets including Brazil (casinos), India (sportsbetting/lottery), Japan (casinos), the Netherlands (interactive gambling), Sweden (interactive gambling) and perhaps California (interactive poker). Their combined value has the potential to add high single digits to the value of the global market, but their launch will take two to five years.
Aside from the chance of interactive poker in California, H2 does not expect any major permissive developments in the US, though there may be discussions/hearings in some of the eastern states.
We expect interactive poker liquidity to be agreed across the UK and European dot.country markets but not to commence until at least 2018 – but is this too little too late for a vertical which peaked over a decade ago now? Furthermore, the aggregation of most of Europe’s liquidity is likely to impact the remaining dot com market. Poker’s share of global igaming win to fall from 6.2% to 5.7% in 2017, a world away from the 17.4% it accounted for at its peak in 2005.
Given the ongoing political turbulence, exchange rates have the potential to shift dramatically during the coming 12 months so it is difficult to place any aggregate number on the sector at this time. However, based on the end-of-2016, we would expect total gross win generated by the global gambling sector to increase by 2.8% in 2017 to reach €374bn, a a rate of increase slightly higher than the 2% recorded in 2016.
Gross win for igaming is expected to increase by 7.5% to €43bn and between 11-11.5% of total gross win, with mobile expected to account for €15bn or 35%. Despite the threat of increased taxation on some elements of the UK market (2016 saw a record £2.7bn or 18% of gross win raised in gambling tax) H2 expects the UK to overtake Italy as Europe’s largest gambling market in 2017, a position it has not held since 2005.
Social gaming will continue to increase its share of interactive gaming activity, with potential to reach as much as 20% of total gaming player activity in 2017.

Stay tuned to iGaming Business for further predictions from more industry experts in the coming days.