Policymakers and regulators taking part in ICE’s International Legislators’ Agenda (ILA) share say what they think likes ahead in 2022. 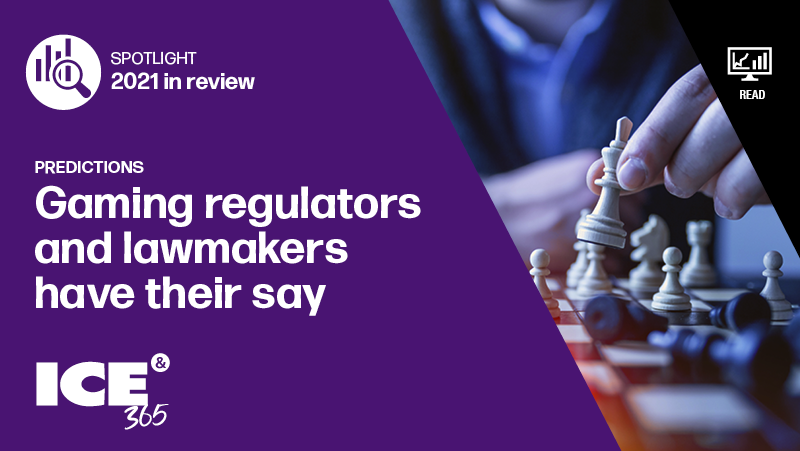 It’s been a difficult year for most regulators, who have faced pressure from both sides of the industry. Struggling companies have looked to them to provide support, while policymakers have been pushing for more restrictive regulatory environments.

Here a trio of ILA attendees discuss the events of 2021, and how these will shape the sector in the comping year.

How is gambling viewed today? Do you feel the sector is facing a period of falling revenue and tightening controls?

Keith Pickard (KP): Gaming in the US has seen a significant shift in acceptance over the past 20 years. What used to legally happen in only Las Vegas and Atlantic City now happens in one form or another in every state. Tribal gaming, lotteries, and legal sports books have become increasingly popular, and traditional gaming revenues have hit all-time highs since Covid restrictions were lifted, due in part to the stimulus money that has fallen into people’s pockets.

Jason Lane (JL): Gambling seems to be becoming more politicised, with an increase in lobbying of governments and more focus being placed upon all aspects of social responsibility. The economic and other benefits brought by the industry, which were commonly discussed twenty years ago, no longer seem to get much of a hearing.

I think that the gambling industry is going to face increased challenges in 2022, particularly in terms of restrictions on advertising and increased regulation to ensure that customers are properly assessed and monitored in terms of their game play. This is likely to mean an increase in compliance costs and a reduction in profitability.

Isabelle Falque-Pierrotin (IF): First of all, online sports betting, horse racing and poker have recorded historic performances so the online sector in France is not facing falling revenue. The sector’s turnover rose by 22% in 2020 to reach €1.7bn, its highest level since opening to competition 10 years ago.

This performance contrasts sharply with those of casinos and gambling or betting points-of-sale, which have been hit hard by the Covid crisis. This year confirmed trend, even if this growth is not without controversy.

An example can be found in the Uefa European Football Championship. This competition confirmed the growing place of sports betting in France, with €434m of online stakes. The French team matches are very popular, with €88m of online bets placed, which means an average of €22m per match.

But the competition has also underlined the existence of questionable practices around sports betting, such as the high media pressure, in particular on the internet, or the targeting of young people. For the first time, the public debate has seized on this very subject with serious concerns relayed from various circles. According to a Harris Interactive inquiry conducted for the ANJ during the period, more than half of those who had seen sports betting ads feel that they are too many of them, and close to eight out of ten French people who had seen these ads consider that they can contain a risk of addiction.

So as you see, there is presently mixed feelings in France toward the growth of the gambling market .

Do you feel this increased scrutiny and operating restrictions are necessary?

JL: There’s an old saying that perception is truth. The perception (or certainly the view that seems to get the most traction) is that gambling firms have sacrificed their responsibility to players in favour of profit.

I’m not convinced that this is a fair assessment. But the industry hasn’t helped itself by dominating sports advertising, particularly football which attracts young people and the industry needs to make a greater effort to demonstrate their commitment to their customers. So long as the industry is perceived to be exploitative, further scrutiny and further restrictions should be expected.

IF: I believe that the gambling market has to be regulated because gambling is not like any other product. It comes with risks of abuse (debt), or of public health (addiction and isolation) for the player and those around him. That is the reason why gambling needs to stay a recreational and moderate activity.

Since 2010 France has chosen the way of controlled regulation, but it has not prevented the market from growing quickly.

But control must also be combined with support. The ANJ supports operators and endeavours to facilitate a sustainable economic stability of the gambling market, which is facing profound changes. It also ensures compliance with legal obligations, which implies a credible and appropriate control strategy.

KP: The existing regulatory structures, whether we are talking in Nevada or in any other state, are robust to the extent of gaming that is allowed in those jurisdictions. As states expand their entertainment offerings, they typically expand their regulatory schemes to match the demand. The particularly glaring problems exist in the unregulated grey or black markets where operators avoid regulatory oversight in the first place. If we truly want to protect consumers, this is where we need to focus a lot more attention.

How could these be tightened or eased in 2022, in your view? Are there any failings that need to be rectified through legislation?

JL: I can see further restrictions on advertising, greater use of affordability tests and, inevitably, ever greater fines and sanctions being placed on firms that do not demonstrate total adherence to their licence conditions. In terms of legislative change, think greater regulatory powers and sanctions.

KP: In my view, increased regulatory responses should focus on the grey and black market operators. Legitimate operators are universally cooperative with the regulatory body that oversees them. They recognise that it is in their financial interest to adhere to the rules under which they fall. They also want fairness, meaning that their competitors (on-shore or off) should be required to play by the same rules. Legislation should be considered anywhere there is an operator who is left out of the statutory or regulatory framework.

IF: The advertising pressure that was observed during the European Football Championship, through the targeting of young audiences, as well as messages that maintain the illusion of easy money, which are are particularly problematic. The ANJ therefore decided to organise a broad public consultation on the advertising practices of gambling operators (in particular for sports betting) in September and October. The aims of the consultation are:

Furthermore, the challenges of combating the illegal offer have increased with the Covid-19 health crisis and the lockdowns it led to. Indeed, as land-based gambling and casinos venues were closed, illegal online casino websites attracted new players. In addition, the more than ten-year implementation of the judicial illegal websites blocking procedure shows that this instrument is often unsuited for the fight against the illegal offer, the main reason being the slowness of the procedure.

Consequently, the ANJ intends to ask the technical providers [such as internet service providers] to participate in the fight against illegal offering. We have started to work with them against unlicensed operators and it seems to be quite productive. We will also be very interested to develop cooperation with our European counterparts on this matter.