Following yesterday’s landmark agreement between the regulators of France, Italy, Portugal and Spain, we look at data and speak to stakeholders to gauge the likely impact of the merged liquidity pool. 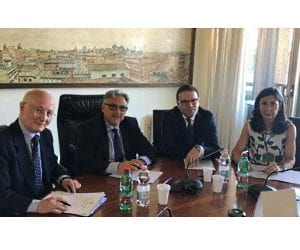 Regulators from France, Italy, Portugal and Spain (pictured, left) yesterday signed their long-awaited poker liquidity agreement, clearing the way for operators active across more than one of the ring-fenced markets to merge the respective player pools.

According to the press release issued by French online regulator Arjel, the regulators will “make their best efforts to enable effective implementation by the end of the year”.

The Spanish regulator the DGOJ and ARJEL began the talks on, at first, information sharing that would eventually pave the way to yesterday's agreement way back in 2012.

Since then debate has raged over whether cross-border liquidity sharing can reverse, or at least stabilise, the global downturn in online poker, exacerbated by high tax rates and restricted player pools.

With conditions having deteriorated considerably in dot.country markets during the time it has taken to get this agreement to the signing stage, a recent piece on Pokernewsreport neatly summed up the prevailing scepticism among the seasoned players found on forums such as 2+2.

Debatable impact, PS to benefit
Comments were of the general opinion that the advent of the so-called FIPS pool would not provide “the level of rewards and promotions offered by unregulated sites, or offer anything new to players who have left the game, very little is going to change”.

This view of the cooperation as “too little, too late” however isn’t shared by operators and networks.

It is also worth emphasising that this optimism extends way beyond the walls of PokerStars’ HQ. The group is the only operator across all four markets and leader in three of these, holding a share of 46% of cash game and 66% of tournament GGR in the largest territory of Italy (see our new Italy Dashboard for details).

Stars does of course look the biggest beneficiary from the merged scenario. This is borne out by figures and analysis from leading industry tracking site PokerScout.

Once you add in the cash game traffic from its current monopoly in the recently opened Portuguese market, its 35% share in the three mature ring-fenced markets rises to around 50%, substantially ahead of its 35% share of dot.com, according to the most recent PokerScout.com Scouting Report.

With main competitors in each country – Winamax in France, 888Poker in Spain, and People’s Network in Italy – not active in any of the other ring-fenced markets, the mingling of its player pools will enable PokerStars to tap its liquidity across the four countries to offer larger tournaments and prize pools.

This will undoubtedly see it become even stronger compared to its primary competitors in each of these, becoming more dominant in Italy and Spain, and potentially closing the gap to Winamax in France.

As Dan Stewart at PokerScout puts it: “PokerStars will be far more dominant over each in a combined pool than it is now with them separated.”

PokerStars’ vice-president of communications Eric Hollreiser was therefore understandably bullish when contacted by for comment by iGaming Business: “As supporters of smart and sensible regulation, and believers in the importance of pooled liquidity, PokerStars welcomes this progressive step forward and look forward to working with our regulators to provide the best possible experience for players.”

According to PokerScout, the other big players in the merged market will be French market leader Winamax, which currently holds around 21% of the combined cash player pools, followed by the largest network of iPoker, with 12%, then PartyPoker with 7%.

Indeed, Stewart at PokerScout also points out that other than Stars, only iPoker has a significant presence across the three main ring-fenced markets.

That said, iPoker's presence across all three and its relative strength within these (10% share in France and 20% in Italy) compared to across the industry as a whole (2.4%) could give the network's licensees an important edge over the other standalone sites.

iPoker’s status as a network rather than a standalone operator in the future merged scenario “may also prove beneficial, as its skins can more readily adjust their marketing strategies to the local markets while simultaneously benefiting from shared liquidity”, according to Stewart.

iPoker head Joerg Nottebaum also emphasised the importance of the potential network effect to iGB, calling the agreement the “right move to increase the attractiveness of poker in the participating countries”.

He added: “We expect to benefit significantly from a larger liquidity pool and, in turn, attract more operators in those regulated markets. Greater liquidity will lead to an increase in player experience and revenues, which will support the positive trend we have already seen in each of the regulated markets over the last 12 months.”

“First good news in a while”
Alex Dreyfus, chief executive of Global Poker Index, who also operated online poker in France both pre and post the 2010 regulation with then iPoker-powered Chilipoker, was also bullish about the prospects for industry participants beyond PokerStars, calling it “the first good news in a while in the online poker industry”.

He explained: “This is obviously great news and a great signal toward the poker ecosystem. It should create more competition between Pokerstars, Winamax, 888, PartyPoker and potentially revive the iPoker network.

“For players, it will create better narratives because of the bigger prize pools, allowing new marketing opportunities to promote poker in each of these markets.

“Hopefully, it will eventually lead to either a larger pool of European countries banding together, or ideally a merge with the international (.com) pool.”

At PartyPoker and bwin owner GVC, which also operates under the Gioco Digitale brand in Italy (5.8% of cash game and 5.5% of tournament GGR in Italy in May), head of media relations Jay Dossetter emphasised that the advent of the so called FIPS-pool would provide the benefit of players having “quicker access to a greater range of formats and buy-in levels, with potentially bigger pay-outs”.

Operators would also be “more incentivised to innovate, because they are more likely to find a critical mass of players receptive to those innovations”, he added.

He was however keen to inject a note of caution: “That said, we don’t believe it will have a great impact on the bottom line in the short term, but it is certainly a positive development.”

So while the cross-border player pool is unlikely to be enough to reverse the decline in these markets, it does offer a glimmer of hope to a beleaguered online poker sector which has been battling the double whammy of diminishing interest in the game and the strangulation of this diminishing liquidity by the taxation and ring-fencing of activity in regulated markets.

As suggested by Dreyfus, this optimism is also driven by the hope that making a success of this initial pioneering step will eventually pave the way to the Danish and UK model of allowing licensees in these markets to open to the dot.com player pool.

The success of the arrangement of ultimately depends on how the regulators in France, Italy, Spain and Portugal cooperate to deal with issues such as these, the potential complexities and red tape around tax arrangements and splits, the differences in technical standards, as well as the division of regulatory responsibilities and oversights.

The 10-page agreement also maps out the large volume of relevant information regulators will need to be capable of exchanging in a timely manner while complying with EU personal data protection standards.

As Wood rightly points out, the efforts of the regulators in lobbying their respective governments in delivering this agreement “should not go unrecognised by the poker community”.

But their hard work is far from over.