It may celebrate its tenth birthday in 2020, but Push Gaming has only now just started to execute aggressive expansion plans, incorporating a key strategic acquisition and launches with top-tier clients. But amid an increasingly frosty regulatory climate, and in one of the most competitive igaming verticals, how does it plan to continue for another decade? 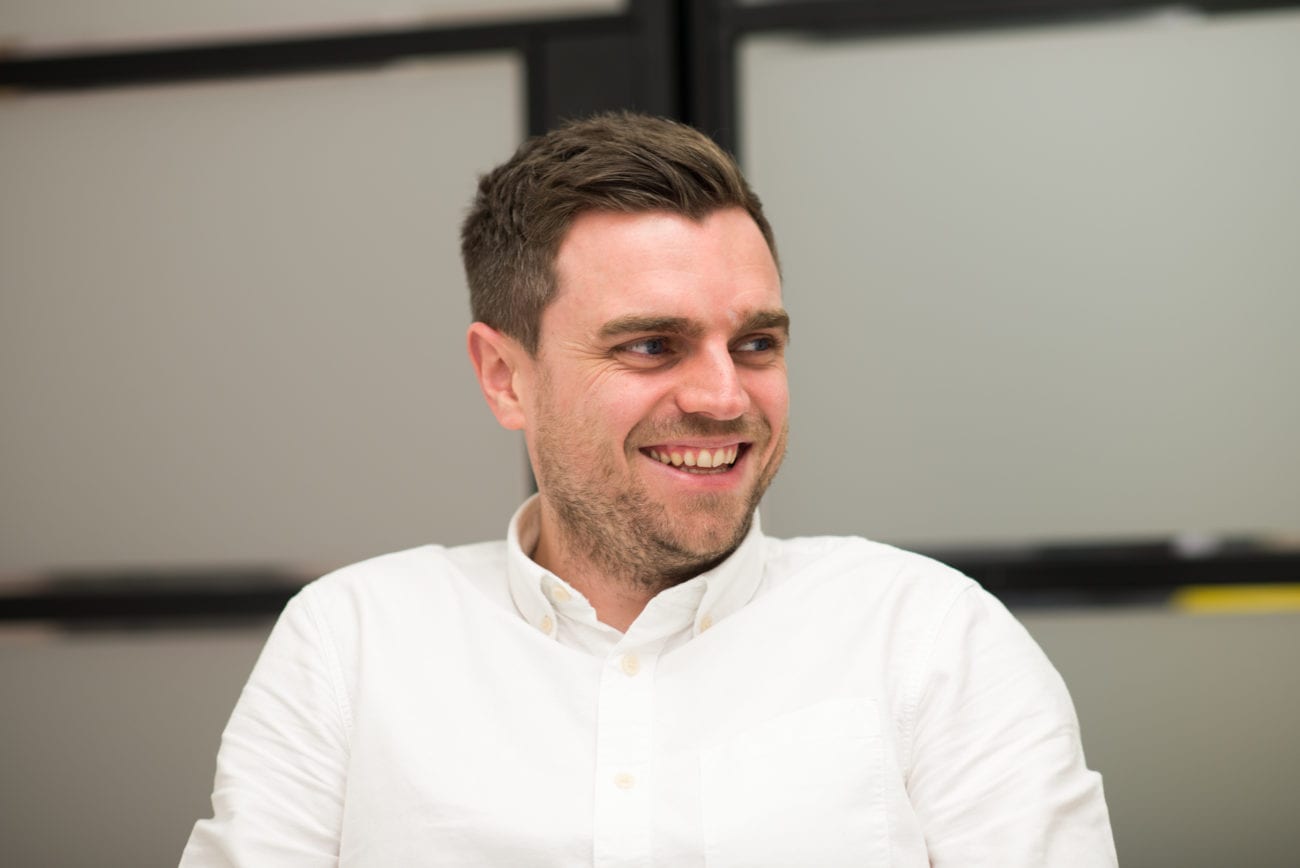 It may celebrate its tenth birthday in 2020, but Push Gaming has only now just started to execute aggressive expansion plans, incorporating a key strategic acquisition and launches with top-tier clients. But amid an increasingly frosty regulatory climate, and in one of the most competitive igaming verticals, how does it plan to continue for another decade?

Push Gaming began life in 2010 as a business repurposing land-based content for online play, at a time when there were fairly significant differences between the quality on offer in each channel.

“There was no one who would take those games and redistribute them online,” the supplier’s chief executive James Marshall (pictured) explains. “GameAccount [now GAN] was coming through at that point, but it felt like a really good opportunity to set up a service taking games online, handling distribution.”

Marshall admits that it took a while for him and his business partner – and Push operations chief – Winston Lee to get the business going, though said it was a sound business model for a bootstrapped start-up.

Two middlemen
Of course, Push is now producing proprietary content, rather than repurposing land-based developers’ titles for new channels. Marshall says that not only was the land-based studios shifting online a factor, but also the commercial returns were reasonably weak.

“We didn’t have our own platform, so there were two middlemen,” he says. “Before we could take our share, the player, the platform, and the supplier, took their cut, so there wasn’t a strong enough commercial model to generate the revenue.”

However, by this point mobile was emerging as the main growth channel, driven by the likes of Quickspin (since acquired by Playtech) and NetEnt. However, Marshall adds that the early titles were designed to be very similar to “rectangular land-based machines”.

This shift to portrait mode – in the early days of mobile casino, often hailed as a major innovation – sparked Push’s expansion into in-house development, via a deal to develop two exclusive titles for Kindred Group.

“That was really the start of us building our own development operation,” he says.

However Push has since remained fixed on a fairly small content roadmap, focusing on a handful of titles, at a time when other studios, both large and small, have gone for more ‘maximalist’ approach. In Marshall’s view, the other studios are there to provide the volume – so Push can focus on the quality.

“Operators are already being serviced with a lot of content,” he says. “Our approach is, what does the player want? Do they want a lot of similar games, or do they want to play something unique?

“I think it’s a bit of both; the competitors deal with the volume, so that’s not an issue for casinos or players. They’ll be getting a new game or five each week. We’re trying to supply something that the players will want, and create new and exciting games, so players and operators can look forward to the latest release.”

He says a “conveyor belt approach” to development would stop his team from creating “really unique” titles. Yet while this is working “very well” for the business, he admits that in order to become more competitive, ramping up its volume of new titles will be necessary.

“Not by producing 50 plus games, but a release pattern that makes us more competitive in the market,” he adds.

Features and functionality over volume
And while a smaller number of really unique titles may offer something different, that’s no guarantor of success. For starters, as Marshall points out, it’s very difficult to create a guaranteed top-performing title.

Push, he says, has a strong – if atypical – hit rate in which 60% to 70% of its titles perform well, and it will be maintaining that hit rate, though with more titles, that will drive the expansion plans.

“We’re never going to get everything right, but we really need to be into the details, what players like, what they might like next, and what they don’t want,” he says. Learning what players don't want is important according to Marshall, as it allows developers to know what features to avoid and in turn make the design process more efficient.

The battleground, as he sees it, is player engagement, volume of players, and individual game performance, rather than sheer weight of numbers. Features and functionality over volume, in short.

Marshall believes this is being aided by the acquisition of gaming technology provider GSI, announced in January this year. This gives Push access to solutions such as the Hive Remote Gaming Platform and Mesh Aggregator, not to mention the expertise of industry veterans (and former OpenBet technical leads) Paul Evison and Paul Beattie.

Until this deal, Push was purely a front-end game studio, but effectively takes control of its destiny with its own platform. It builds on an existing relationship between the businesses, that saw Push acquire an instance of GSI’s remote games server and integration layer, and Marshall says this collaboration “was the best due diligence we could do on the business”.

“It didn’t make sense to part ways when the handover of code was completed,” he explains. “The companies just aligned very well. The potential was much greater, looking at speed and the team synergies together, than as separate businesses.”

The deal has had an immediate impact, and “definitely played a part” in Push’s supply deals with GVC Holdings – announced in April – and William Hill, for which it launched content that month.

“The UK hasn’t been a main market for us, due to the partners we work with, so we’ve been focused on Scandinavia and other parts of Europe,” Marshall says. “It’s been brilliant to get these deals with such massive brands in the UK. Ultimately the platform just gives us the opportunity to control and operate in the markets we want and to control the distribution in general.”

Regulatory uncertainty
Having only raised significant funds in the past three years, after spending most of its life to date as a bootstrapped start-up, Push has the clients and the technology to ramp up growth. However, this coincides with a period of significant uncertainty for online casino, especially slots.

In Great Britain, there is growing momentum behind a cap on stakes at between £1 and £5. In Germany players will be limited to a €1 stake per spin. In Sweden, a SEK5,000 weekly deposit limit is in force. Regulation is likely to limit growth, or even prompt casino revenue to decline in the coming years.

Rather than bemoan this climate, Marshall is quick to state that he sees new regulations as a good thing. It’s how the industry is – and should – be evolving, he says. But he adds, slots are designed as a form of entertainment. If technical changes mandated by regulation take out the entertainment value, the business is no longer viable.

“What concerns me most, particularly with technical requirements, is damaging the entertainment experience,” he says. “With some of these requirements, there’s no evidence of them reducing gambling harms.
“The regulations have to be practical. Regulators need to understand the majority of payers that do not have a problem with gambling.

“By damaging the entertainment element so much so, whether that’s through stake limits, spin times, especially in Germany, that will have a negative impact on the entertainment value of that game,” Marshall says. “If you’re taking away that excitement through regulation, it’s almost certain that players will move to illegal sites.”

While he points out that the bulk of regulations affect operators, he feels suppliers can play a more active role in discussions with the wider range of industry stakeholders.

“I think for us as a supplier it’s important for us to work with the operators at the forefront of regulations,” he explains. “Most of it falls on the operators but we shouldn’t look to leave that with our customers and see it as their issue. We have to work out ways of supporting them.”

Equally, the operators can help their supplier partners by speaking up for them, especially when it comes to new technical standards. As the B2C businesses tend to interact more with regulators, and more clout with these bodies, Marshall believes they need to highlight what happens when technical changes change the player experience.

Creating a responsible and sustainable industry is crucial, he adds, but equally so is playability. If players don’t have fun, they will find sites that offer more entertainment value.

Even when faced with these issues Marshall believes there is still significant room for growth at Push. He says that having only recently begun the fundraising process, the backing has allowed the supplier to significantly expand in a short space of time.

“The challenge for us now is prioritising the opportunities and understanding the potential there is,” he says. “We have a lot of big operators that we are launching with now, and have had many tier one launches in the past five years.

“That being said, despite all this growth, there are still so many potential new clients and a lot of other markets for us yet to enter.”

“There’s a lot of opportunity out there for us. We have already achieved so much, yet there is still so much more we can do, which is really exciting for us in this new phase of business that we’re entering.”