Ernie Stevens Jr has led the Indian gaming industry's leading trade association for more than 15 years, during which time revenues have risen from $11bn to close to $30bn. iGBNA caught up with National Indian Gaming Association chairman Ernie Stevens Jr to find out how igaming is seen within the context of Indian Country in 2016. 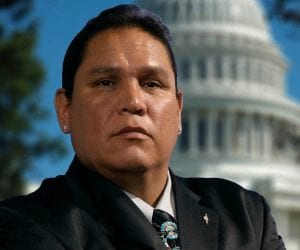 Ernie Stevens Jr has led the Indian gaming industry's leading trade association for more than 15 years, during which time revenues have risen from $11bn to close to $30bn. Paul Girvan caught up with Stevens at the National Indian Gaming Association's annual conference back in March to find out how igaming is seen within the context of Indian Country in 2016.

iGaming Business North America: What is NIGA’s official position on igaming as 2016 rolls on?
Ernie Stevens: We have a set of principles that were developed a few years back amongst our membership. We met several times over several years on this issue, even going back to before the Unlawful Internet Gambling Enforcement Act (UIGEA) being passed in 2006. We weighed in as best we could with UIGEA. We obviously weren't happy with the way it was rolled out, in December 2006 at the end of the legislative session attached to terrorism legislation. But we did have some points in there to protect Tribes. So we were, while not really happy, appreciated that at least if it hurt us to some extent, at least the Congress listened to us, but we would have liked Congress to roll out that law with more Tribal consultation. A lot of people would have had less problems with the bill, especially as it relates to tribal sovereignty. Our approach starts and ends with tribal sovereignty.

Following passage of UIGEA, we kept up the energy in trying to deal with this issue, and about three to four years ago, our Internet Gaming Subcommittee, consisting of the leadership and members of our board, met several times. NIGA helped Indian Country coalesce around a common set of principles regarding internet gaming. These principles can fairly be summarized as respect for existing State-Tribal compacts; no federal or state taxation; and internet gaming must be accessible by Tribes in all jurisdictions where it is legal.

iGBNA: Is that position changing in response to the wider developments around igaming, such as the launch of real money gaming in New Jersey. Are you looking to restate those principles in any way?
ES: No, our principles are pretty solid. On that, our former chairman Rick Hill, the council members and various advocates have made it clear that we want to stay in tune with the internet world, and be able to advocate from within that world as it grows around us. So, we stay in touch and we stay focused, and some of these people know more about the internet than the folks running the internet! So we continue to advocate, and we have made our point very clear regarding our role in the wider internet world. We are sovereign governments, and want to be treated as such, and that's pretty much what the principles outline and support.

iGBNA: Can you update our readers what governs a Tribe’s ability to offer iGaming? What about social gaming or the “freemium” model? Do state compacts limit it?
ES: I think it comes down to tribal sovereignty and tribal government and how they roll into this business, trying to understand how the law applies to them, and as they analyze this, they will move forward accordingly.

“I don't think that internet saves the world. I think it's an economic tool,
one that tribes need to be on the front line with”

iGBNA: Some larger tribes have really stepped up to the plate on igaming. The Mashantucket Pequots spring to mind, having developed a B2C as well as a B2B business. Do you believe the development of an interactive business is a viable approach to economic diversification?
ES: Yes, of course I do, absolutely. I don't think – and I'm speaking personally here and not on behalf of our principles or the member tribes – that internet saves the world. I think it's an economic tool, and that it's an economic tool that tribes need to be on the front line with, so we can benefit like anyone else. So yes, I see it as a means of diversification, not an economic lifesaver.

iGBNA: What is your opinion on Sheldon Adelson's campaign to ban igaming, Restoration of America's Wire Act (RAWA), and its potential impact on your members?
ES: NIGA’s stance on RAWA is generally in opposition to the bill, especially the way it is written now. If Congress wants to amend the Wire Act and outlaw internet gaming (again, by the way), there needs to be serious policy discussions, hearings, and engagement with our industry. For such a major social policy issue, it can not be driven by Adelson’s group, or other special interests. With all due respect to Adelson, and Senator (Lindsey) Graham (who has come out in support of Adelson's efforts to ban igaming in the US), we need consultation with the Indian gaming industry and other interested parties before a bill like this is seriously considered.

iGBNA: What advice would you offer igaming companies looking to partner with tribes or wanting to sell products to tribal casinos?
ES: To understand the limitations of the laws, as they exist now, and to help tribes understand and prepare for any growth or advancements of the industry, but mostly to help utilise what is available to us right now, so we understand and appreciate the benefits. However, please don't try to push tribes into anything that's not legal or appropriate. We have great legal counsel, some of the best legal teams in the world. We understand the law, and we don't want businesses to help teach or help us understand how to bend the rules. We need to know what's available within those legal parameters, and for those businesses to then help tribes excel in that area. We don't want to become practice cases, and our lawyers will tell us which activities are appropriate or not.

iGBNA: There appears to be some hesitancy among tribal casinos to add social gaming, and evidence suggests most platforms are not driving business to the land-based casino as they're supposed to. Why do you think this is?
ES: Some people think that tribes are stoic, distant and stand-offish. But we are professional, we are responsible and we are careful. Right now, the slot machines are bringing the dollars in, as are our table games, food services and entertainment. We are not hesitant. We understand it. We move slowly to implement it. But we are not hesitant just because we don't embrace or try to be the champions [of social gaming]. You would not believe, and I can't even tell you, what our folks are doing to be ready for that. But right now, what's working is what we have been doing for the last 20, 30 years, and we are going to keep doing that until someone tells or shows us otherwise. So, there's no hesitation on our part. We like what we're doing, and we are going to do our best to keep it that way.

iGBNA: What are your main lobbying focuses for 2016, and how prominent or integral are igaming-related issues to these?
ES: I think it is. What we are doing is trying to maintain the strength of our homelands, and re-acquire our homelands, and to do things that move our communities forward, such as education and healthcare. Those are our priorities, and to the extent that there will be other matters that are responsible [for assisting with these priorities] we are keeping a close eye on the internet world. But we want to focus on and strengthen exactly what we are doing right now, but to think we are not active and involved in this area would be a mistake on anybody's part. We may appear stand-offish or like we are not engaged, but that's not the case.

You mentioned that gentleman Sheldon Adelson earlier. We respect those businesses, and they do what they do, but we are responsible to government and to community and are subject to far more oversight and scrutiny. The bottom line is that when it comes to what we do on behalf or our community, we have to do it better than anybody else, and we feel like we have. We have a responsibility, we have a community, we have a need for education and extended healthcare, and the need to build economic tools that will complement and go beyond gaming.