The expansion of online gaming in Germany has been a fraught process, and the legal market’s success will be hindered by a prohibitively high tax rate. Dr Wulf Hambach outlines what is at risk from the turnover tax, and the fight to save the market. 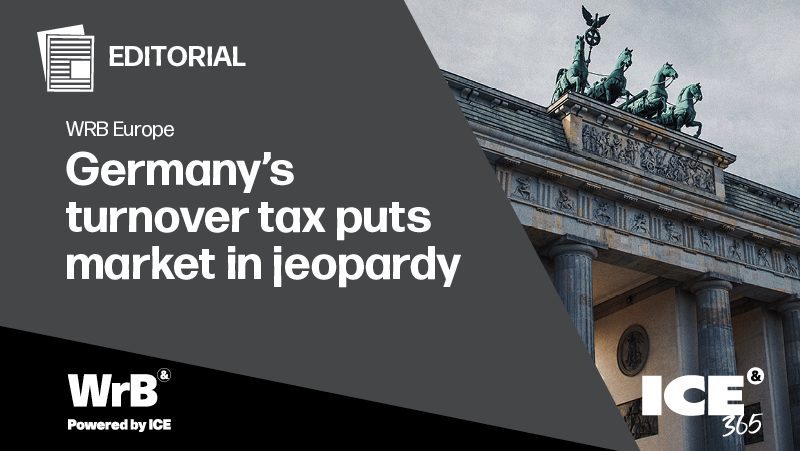 On 23 June, the German Bundestag passed the Racing Betting and Lotteries Act (RWG).

The Bundesrat bill (19/28400) proposes to tax online poker and virtual slot machines in the same way as other, comparable forms of gambling. By 30 June, the new Act was published in the federal law gazette (Bundesgesetzesblatt).

Considering the heavy criticism ahead of its enactment on July 1, this legislative process can be seen as a pure masterpiece by their initiators and lobbyists. The main challenge timewise has been to achieve a simultaneous enactment with the new State Gambling Treaty.

And to knock out overlook the harsh criticism from several competent state ministers, concerning the inability of the law to achieve a proper channelisation of online gambling behaviour.

The main arguments to support this ‘masterpiece’: “Modernisation of the RWG via harmonisation [of] the tax online gambling by expecting additional tax revenue of 365 million euros per year”.

In this respect, Member of the Bundestag Stefan Schmidt (Bündnis 90/Die Grünen parliamentary group), a member of the Bundestag’s Finance Committee, said during a Committee’s hearing ahead of the enactment: “From my perspective, it is in line with the logic of the Racing Betting and Lotteries Act, because all types of games are taxed there on the basis of the stakes.”

In addition, he says, gross gaming revenue is too susceptible to design. A tax of 5.3% is also “relatively moderate”, according to Schmidt in a recent interview with the ‘Behörden Spiegel’, a leading German publication for administrative and legislative affairs.

However, whether this precision landing of the RWG tax law alongside the 2021 State Treaty will be also be seen by the European Union Commission as a sustainable solution is doubtful. Especially as the Commission has  initiated a prompt investigation via state aid and potential EU notification errors. Let’s explain, why…

The Racing Betting and Lotteries Act was passed in its current form 100 years (!) ago and has since been amended and adapted only slightly. In 2012, the German Bundestag amended the law, to include the taxation of sports betting.

Now online poker and virtual slot machine gaming have been included. Unlike terrestrial gambling, where the portion of revenue (GGR or NGR) is taxed, online gambling is now taxed on stakes.

The 2021 State Treaty on Gambling, which came into force in July 2021, will allow virtual slot machines and online poker to be offered for the first time, through a permit issued by the supervisory authority in Halle (in the state of Saxony-Anhalt) across all federal states.

Since these products were not regulated until now, the previous Racing and Lotteries Act did not contain any requirements for the taxation of these verticals. From now on online poker and virtual slot machines will be taxed in the same way as race betting, sports betting and public lotteries..

The taxable amount is to be the stakes paid less the tax, which includes all expenses incurred by the player for participating in the game. The two new forms would each be taxed at 5.3% of the assessment base. The lottery tax would remain unchanged at 20%, with a 50% return-to-player (RTP) for its products.

Online table games will be taxed in each state differently, but by looking at the drafts from Nordrhein-Westfalen or Schleswig-Holstein the tax base will be not stakes but gross profit revenue.

The European Betting and Gaming Association said in this context that the proposal would provide a “substantial and unfair” tax advantage to land-based gambling venues in Germany, and therefore filed a complaint in Brussels.

“However, we urge the German parliament to reconsider the proposed punitive rate of the tax because it will push German players to use unprotected and unregulated black-market websites and give land-based operators a massive tax advantage,” he continued. “We stand ready to share our experiences in other jurisdictions of the EU, and firmly believe that a tax level can be established which strikes the right balance between meeting the needs of the German consumer while ensuring sufficient tax revenue for the state.

“Should the measure go ahead as proposed, we will have to consider all available options, including filing a state aid complaint with the European Commission.”

The fact that Malta’s Gaming Authority (MGA) has reacted to the 5.3% turnover tax by lowering the minimum RTP percentage for its licensees from 92% to 84% shows the non-fiscal ramifications of the levy.

This is only one reason why this gambling regulation should have been notified to the European Commission in advance, but this was not possible, due to the tiny time window for the precision landing.

Consequently, the German Association for Telecommunication and Media (DVTM) submitted a complaint on July, 13.

This complaint alleges that the German authorities have infringed their notification obligation under Article 5 (1) of Directive (EU) 2015/1535 by bringing the law into force without having sent the draft to the Commission in advance. Sections 37 and 38 of the RWG 2021 contain provisions on information society services.

If the European Commission comes to the preliminary conclusion that an infringement of the law is likely, it enters into an informal bilateral dialogue via the electronic communication tool “EU Pilot”. And if the infringement is not remedied by the Member State, which if often the case, the Commission will initiate a formal infringement procedure.

Finally, the largest internet industry association in the EU, eco e.V., is currently requesting an immediate correction of the new online gambling and tax regulation.

In this respect an eco survey from June 2021 shows: Excessive government restrictions could counteract player protection in online gaming. Eco has asked one of Germany´s leading financial experts Professor Dr. Bert Rürup (president of the Handelsblatt Research Institute) to present his findings who said: “Players in online casinos react very sensitively to changes in gaming conditions”.

“Over 40% of online casino players would look for an offer where the playing conditions have not deteriorated.”

The 5.3% tax on stakes, which is planned by the federal states and extremely high by European and international standards, could make legal and licensed offers so unattractive that they disappear from the German market in the medium term, and players prefer to resort to illegal, unregulated offers in which no appropriate player protection is guaranteed.

Eco therefore recommends that adjustments should be made: “The new State Treaty on Gambling is an important step towards modern German gambling regulation, but there is also a need for improvement,” the association’s honorary president Profession Michael Rortert said. “Liberalisation and channelling should be the basic idea of regulation in the State Treaty on Gambling and also in taxation.

“The legislator should therefore design its regulation in line with the law and, above all, in line with the market, so as not to counteract its original objective of opening up the market and liberalisation. This is jeopardised by the tax plans of the federal and state governments,” Professor Rotert explained.

“Denmark, Spain and Italy show how it can be done and should also be considered as best practice in terms of channelling for the German legislator,” he added.

All in all, if one looks back to the past EU reforms of online gambling regulations as stated by Professor Rotert, one main failure in Germany’s gambling regulatory discussions has to be highlighted: The lack of transparency via the REAL involvement of foreign gambling regulation experts. The world wide gambling regulation community organize countless workshops offered by platforms such as the Gaming Regulators European Forum (GREF), International Association of Gaming Advisors (IAGA) and World Regulatory Briefing (WRB).

This event was organised and hosted by the London-based conference agency Awedacity, which specialised in gaming regulation in Europe, and provided a transparent overview of the regulation and the tendering process.

These included, among other things, the individual steps in the application process and the regulation of the technical procedures that were to fulfil before a submission to the Ministry.

Even though the new regulatory body in Halle is still a ‘black box’ in many fields, and lacking any form of dialog, there is light at the end of the tunnel: The new interim chief gambling regulator is from Schleswig-Holstein, Mr Ronald Benter.

Together with his IT staff, he is advising the new regulator’s team in Halle on the safe server structure that was used in Schleswig-Holstein. This sounds like the new gambling regulatory authority does not want to be reinventing a new wheel, and use Mr Benter’s previous role as an example – hopefully also in respect of its transparency with the industry.

And let’s look at Schleswig-Holstein’s tax rate in 2012: 20% of gross gaming revenue (GGR). If the Halle authority is serious about learning from its predecessors, this same wheel should also be used to skip EU proceedings against the new tax law RWG.

Wulf Hambach is one of the founding partners of Hambach & Hambach, and one of the industry’s foremost legal experts on the German gambling market.

Keen to learn more about Germany’s re-regulated gaming market? Europe’s biggest opening of 2021 to date will be discussed by an expert panel at iGB Live! The show runs from 28 September to 1 October, and will feature the session Embracing regulated igaming: Germany focus – register here to book your place.