When it took charge of gambling regulation in France, L’Autorité nationale des jeux (ANJ) said it would conduct its duties in a way to favour a sustainable market. This has seen it turn its attention to industry advertising. And with rumbles of an advertising crackdown, how can France’s operators continue to thrive? 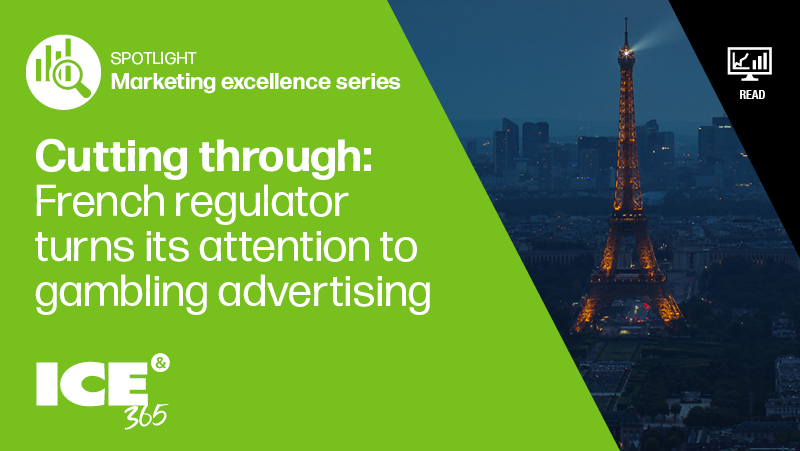 Following the UEFA European Championship 2020 (the Euros), France’s gambling administrator L’Autorité nationale des jeux (ANJ) issued warnings to operators after it found that “a line was crossed” in gambling advertising.

The body, upon taking charge of the market in June last year, said it would pursue a socially responsible approach to regulation. And in 2021, this has duly guided its actions.

In January this year, the monopolies were the first to fall into its sights, when ANJ expressed concerns over perceived excess marketing strategies used by La Française des Jeux (FDJ) and Pari-Mutuel Urbain (PMU). As a result, ANJ emphasised that the monopolies should only offer “measured and strictly limited” advertising in accordance with the jurisprudence of the European Court of Justice.

Two of ANJ’s main concerns lie with the protection of minors and prohibiting excess gambling advertising. Operators breaching one or both of these rules face fierce criticism from ANJ.

“The Euros have created quite a lot of debate,” says Diane Mullenex, lawyer and solicitor for Pinsent Masons in France and the UK.

“It was just after ANJ published its annual report, which showed that there was an increase in the number of people betting.”

Indeed, the report showed that the number of people betting on sports during ANJ’s first year of administration grew by 12%, hitting 3.8 million.

At a meeting with operators on 20 July, ANJ addressed both the number of advertisements and their content, among findings that young people had been specifically targeted with betting advertising.

This targeted advertising can emerge in a variety of ways, one of the clearest being language.

“If there is a situation where the language featured is slang that kids use – the way they speak among themselves – someone over 35 would have no idea what that language means,” says Mullenex.

“This is obviously a decision to appeal to a certain type of population.”

On a wider scope, vulnerable people in general were also said to have been targeted.

“The [advertisement] that was the most criticised was from Winamax,” adds Mullenex.

“[It] showed people from a relatively poor background, living in social housing. The mother was in a lift that was going up into this magical world where everything was handed to her – as the son was betting and winning.”

The consultation canvasses opinion on the advertising practices of operators in France, honing in on sports betting in particular, to evaluate the effects of gambling advertising on the French public.

Based on the responses, ANJ hopes to rework its current advertising regulations and create higher standards to follow when advertising to young people

Isabelle Falque-Pierrotin, chairwoman of ANJ, emphasises the importance of conducting the consultation with the general public at the forefront.

“The consultation aims to give the floor to operators, citizens, stakeholders and health associations in order for ANJ to make a proposition by the end of the year,” says Falque-Pierrotin.

“Maybe we will come to propositions enriching [the] legal framework. Many ideas have been put forward.”

Mullenex believes that betting establishments can do more to adhere to current rules in the meantime, namely interacting with the industry.

“I think that operators need to do the appropriate work to make their voices heard and make sure they can work better with stakeholders,” says Mullenex.

“They [operators] already have stringent controls on addiction. But it’s probably good to have a dialogue with various associations, to work with them and try to be more clear about the self-exclusion mechanisms.”

The extent of advertising responsibility

In the wake of the consultation announcement, discussion has surged on how best to ensure a responsible level of gambling advertising.

“In terms of advertising, obviously there is a problem.” says Falque-Pierrotin.

This is a concern that the consultation aims to address. However, Falque-Pierrotin stresses that ANJ does not wish to stifle advertising freedoms, which can be a useful asset in morally engaging customers.

“The idea is not to stem innovation or creation in advertisements,” she says.

“We are aware that when advertising is attractive enough to the players, they will be more likely to play legally instead of illegally.”

While altering advertising content may be the way to success, operators may need to prepare for the event of an all-out ban.

From a legal perspective Mullenex questions whether the law could feasibly class gambling advertising in the same realm as other restricted entities and diminish its effect on minors.

“We have a law in France that prohibits any advertisements for tobacco or alcohol, which also has some very strong restrictions about advertisements or sponsorships,” says Mullenex.

“You can’t sell or advertise them near schools, or to children. You also have to keep them away from websites that are aimed towards younger audiences. The big question in France is, are we going to have a law that is applicable for betting? I don’t think we’re going to go that far, but it’s difficult to assess now.”

Alternatively, the question arises on whether a restriction in gambling advertising law would make a substantial difference to the impact of gambling on children.

In its annual report, ANJ referred to a 2020 study by Harris Interactive which found that 41% of parents surveyed had already offered a form of gambling to their children, from an average age of 11.

If children are being offered gambling by their caretakers, restrictions in advertising may not be enough to protect them.

Further to this, Mullenex believes that a reduction in gambling advertising may not impact the market and how often people play.

“In the UK for example, there are not a lot of ads,” says Mullenex.

“Even in the streets, there are not a lot of ads. And in some countries, ads are forbidden but that doesn’t mean that people don’t play.”

The future of gambling advertising

In other areas of Europe, gambling advertising laws have started out considerably laxer than France’s and have made strides to tighten up over the years.

On 1 July this year, Germany implemented its Fourth State Treaty on Gambling which, along with controversial measures such as the 5.3% turnover tax on operators, mandated much tighter restrictions on gambling advertising. For one, German operators are no longer allowed to use athletes or sports officials in sports betting advertising.

In July 2019, Autorità per le garanzie nelle comunicazioni (AGCOM), Italy’s communications authority, implemented the Dignity Decree. The decree outlined that direct and indirect advertising, along with promotional content and advertising sponsorships, would be banned completely.

France, on the other hand, started out with a strict regulatory framework. As well as stipulating in 2010 that only online sports betting, other online betting, betting on horse racing and online poker was allowed, it also originally calculated gambling tax based on turnover and later amended the law to change it to gross gaming revenue, though it kept the rate high.

“We need to assess the efficiency of our regulatory tools,” says Falque-Pierrotin.

“This is one side of the answer, but maybe it will not be enough.”

While the future of gambling advertising in France remains ambiguous, ANJ is hopeful that the consultation could provide more clarity on the uncertain market.

“[ANJ] needs to reach a balance in terms of helping an industry that’s heavily taxed and heavily regulated and the public order,” says Mullenex.

“It’s going to be a challenge.”